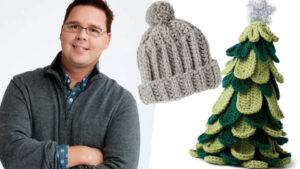 Lunch and Learn with Yarnspirations was on Thursdays in 2020. They are hosted by 1 of 4 company teaching hosts that include the Yarnspirations Design Team, Marly Bird, Moogly and myself, The Crochet Crowd.

Each of us have our own flare and demonstration techniques which sets us apart. Generally speaking, I usually online twice a month for this but I do fill in when others aren’t available. It’s why I have about 50% of the broadcasts for the year.

I prefer to feature other designers, other than myself as community members already know about me and my designs. So I use the time to propel other designer patterns during the broadcast so that others in Yarnspirations can have their moment to shine. With over 7,000 free patterns, it’s not hard to pick.

Each of the galleries are separated by the hosts who taught them. You can click on the images to go directly to the pattern. For Mikey’s Patterns, all of the patterns have matching tutorials that can be located on his YouTube Channel. Top menu of this website has tutorials by categories where they also can be found.

Yarnspirations added more new lines of yarn this year. From different staple yarns to novelty-based yarns. Bernat Symphony was one of my favourites of the year. Caron Little Crafties are really ingenious for introducing crafts and I got a new scarf out of it that was so colourful.

Mikey from Canada. All patterns shown below (exception is the snowman) has a matching tutorial and links go directly to article here on The Crochet Crowd where pattern and video tutorial access can be found together.

Marly from the USA.

The Design Team is hosted by several designers from Canada.

Tamara from the USA.