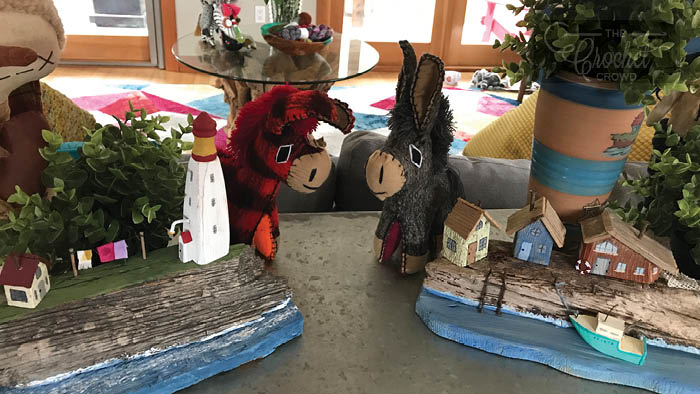 Let’s face it, I’m addicted to The Crochet Crowd. I’m a self-created workaholic with always wanting to work. Honestly, being in a relationship with me a huge personal sacrifice as I am so distracted by many elements of my work.

While I am really good at flattening out the memory foam of my computer chair, a lot of stuff happens around the house and to me personally in being fully exposed on social media in being available to receive praise but also the ugly negative side of social media. Some days, I just think… What have I done to myself? 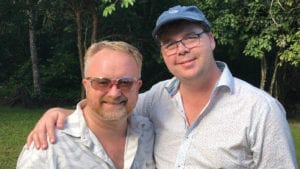 So let’s talk about idiosyncrasies about my personality:

Usage of the word Hate

Since the evolution of Facebook, I don’t like to use the word Hate. It’s such a strong word where my perception of the meaning has changed. Do I hate cheesecake or do I dislike it? Ah, I dislike it. Only a few things I can name where I truly hate something. Like who enjoys a colonoscopy?

A Phone and Me Don’t Belong Together

I used to work in a call centre for a time in my life. The constant ringing of the call centre. Most calls were okay, a few calls really great and definitely a handful of memorable calls where you could literally reach through the cord and snuff someone out. Chained, emotionally and through paycheck-wise to a desk for 9 hours a day was enough for me. It taught me to not want to use the phone for personal calls. Today, I don’t like to call people for personal reasons as I feel I am interrupting their daily lives and what I have to say is probably not important anyway. I’ll just toss them a message through email as they can answer on their own time.

Someone in this house cannot change the damn toilet roll. Yet, he can get it out of the cupboard and use it and leave it on the counter. The garbage pail is right beside the dispenser, there are no excuses. If hell does freeze over and he decides to put it on, he does the paper going under. NO, NO, NO… I have to fix that!

I have many more… I won’t bore you with more today. 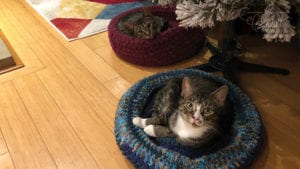 Puss Puss, in front. Binky Boo is in the back. This is not photo staging, they love their baskets.

Binky Boo and Puss Puss are just two fun cats! Daniel insists he wants a dog! Maybe I should make a deal with him that if he can learn to change the damn toilet roll properly, he can consider a dog. With our travel, I feel having a dog isn’t fair to the creature.

Bothy kitties are really loveable. They are so affectionate and when they need extra love, they know exactly where to come. Binky Boo, oh that sassy cat, has got into the bad habit of being a purring machine at 5 am in the mornings. She sleeps on the bed but then wakes up and starts to purr and walk up to our faces. She noses us and head bops. If you ignore her, out comes her paw to wack you on the nose. Not happy campers but, of course, she is just looking for a few strokes but then she gets greedy and keeps begging for more. 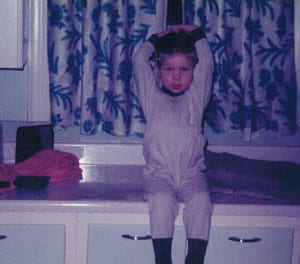 While The Crochet Crowd and my personal Facebook Page is a political free zone. I am obsessed with what is happening in politics globally. Some things just really make me cringe and other things just make me drop my jaw. I’m not taking a position one way or another in politics. However, I am watching the political dramas unfold. I want to be a witness to major decisions and say, “I remember the day when…!”

Remember where you were the day the USA experienced 9/11. I was working at the phone centre and our phones went dead. No one was calling in. Our dispatch was wondering what was going on. We turned on the radio as someone who called in mentioned that a plane flew into one of the buildings in NYC. From that moment, we sat quietly all day completely in the dark about what was going on. I worked on the international side of packages being shipped from Canada to the USA. All international shipping was cancelled. I went home. I had no TV but had the internet and started to put the pieces together. My friend and I went out to the bar for wings and a beer. The news was on and everyone is glued. My friend says to me, “I cannot believe this shit!” I had no TV or didn’t follow anything beyond headlines that I didn’t know how serious it was. I will never forget that week.

My obsession is based on what happens globally can eventually make its way to Canada. For the good and bad, it depends on what is happening globally. 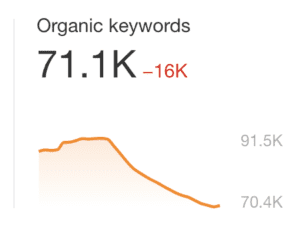 People who know me well know that I am a statistical freak of nature. While some people follow the news or read the newspaper, I’m addicted to the following metrics. Our site on a specific day took a nosedive of 16,000 points. Right now, it’s starting to go back up.

What’s changed you might wonder? I’ll be damned if I know! Suddenly on a date, the website just took a decline without warning. Nothing has changed programming for us.

We see this from time to time and usually, it’s not that obvious with a slow decline but the floor fell out of the sky here. So guess what I am working on now?

The Crochet Crowd is founded on the principle of teaching myself programming and analytics reviews but once in a while, like this one, it’s come out of nowhere and the answers aren’t so obvious.

So what happens when something like this happens! Something drastic, a complete overhaul. Usually, in a nosedive, it will take several months of re-programming to fix and adjust to the new changes that search engines are looking for. At this time, the problem isn’t obvious so it’s a crapshoot and guesses in the dark. Very frustrating indeed.

I know during times like this to expect sarcastic and side remarks about being unavailable. I have to fix what is wrong and cannot play on social media in a social sense as I am buried behind a monitor collecting a tan from microns. 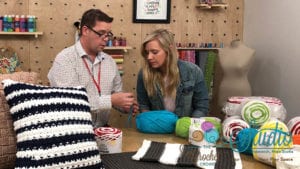 This year has been very trying on my mental state, to put it mildly. It’s hard to be on when you feel like you are emotionally shutting down. Social media has been very difficult in the amount of fighting and spiteful comments that people leave behind.

Speaking bluntly, I think people forget there are real people behind the scenes that need to clean up after someone has entered a social media page and thrown the furniture about. My team and I are were at a loss several times this year on running out of paper towels and energy to clean up the social media messes left behind.

Before the last Crochet Cruise, I was an emotional mess. I would cry on a dime behind my computer. I would have to walk away from my computer and seeing it as an evil device that is ripping me apart. As much as humans claim they are civilized, sometimes, even with myself, I wonder if we truly are when we cannot even get along with each other.

The Crochet Cruise allowed me to reset myself. I laughed like I haven’t laughed in a very long time. I came back with a refreshed attitude and I am doing so much better than I had been in a long time. I just needed to be reminded that I am a person and not a personal punching bag that social media is convincing me to be.

Since coming back, I am letting things that would bother me just fly right over me instead of letting myself being bathed in hate and attacking comments. I had a comment this morning and before the cruise, I would have just walked away from my computer and just go crochet a sample I need to make. This morning, I know the problem isn’t my own and they are just projecting onto me. If I allow them to get to me, they will win but I don’t want to adopt their hateful feelings but allowing them into my heart. So I have had to reset myself.

Getting Ready for Christmas

Daniel and I are busy this year and have decided not to decorate the house for Christmas. We have a planned Christmas Party next week. We are excited about the social element to the party but not going to go all out for the festivities this year.

Mentally, I am already working on January / February time frame in my head and sample wise. 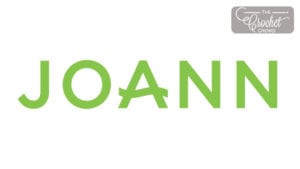 JOANN Stitch Along with The Crochet Crowd

JOANN Sample for Spring Stitch Along

The designers of Yarnspirations design the JOANN Stitch Along each time. They have released preliminary concepts but not the actual project yet. Daniel saw the concept and first words out of his mouth! “Dear Gawd, how are you going to be able to teach that!?”

I told him I don’t know but I am super excited about it. I had my weekly call an hour or so ago about the project. The concept is new, even to me, so Daniel and I were thinking that maybe a small practice sample could be done in advance as a separate project so that when it comes out people don’t assume the worst.

It’s out of my comfort zone which makes it a perfect Stitch Along. I did confirm it’s just a Crochet Along as usual for Spring. It’s just the fall that gets both Knit and Crochet Versions.

For now, I have to get back to fixing my website. I did an overhaul this morning to adjust for the dip to change up the programming. One of the tweaks isn’t seeming to take effect to the side you can see. I need to do more research.

I’m unsure if you care about what is happening behind the scenes or how I feel about certain topics. So I am just putting it out there. I have a lot going on right now.

I plan on writing a weekly update. I will update about the The Study of Christmas Afghan aka Jeanne and I’s Toss Toss Afghan.