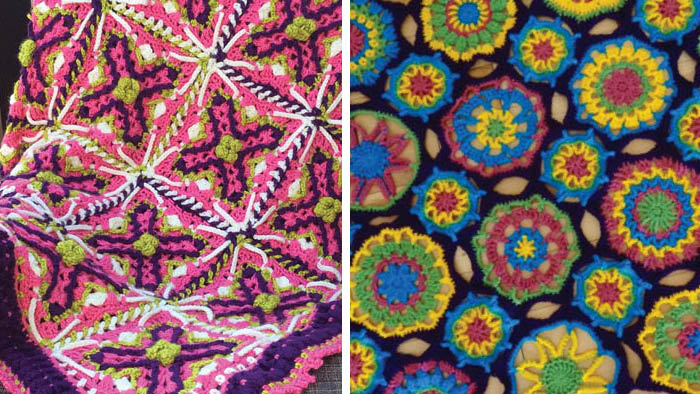 In 2015, we had just started with Yarnspirations and they wanted to test try a Stitch Along with our community. Being new to Yarnspirations, I wasn’t sure what to expect for complexity or steps. The work of deciding, designing and putting in the groundwork had already been done.

There was no other stitch alongs scheduled for the year and we felt the summer hits a low and wanted to try doing a summer stitch along. This year marked the first time of running a stitch along during the summer.

Below are the two stitch alongs with projects.

The Mystery Stitch Along Afghan was done in the complete dark. No clues to what it looked like. Crocheters knew it would be an afghan and several colour options were suggested.

This was 10-week mystery crochet along in the spring of 2015. Crocheters worked on their steps as each week continued.

The colour options for this were incredible. It was using Caron Simply Soft yarn which provided stunning opportunities.

There are over 3,600 examples of afghans in all different colours available to inspire you further. See the entire gallery. To date, it has been the biggest mystery stitch along presented in our history.

For me personally, this really pushed my boundaries on crochet. The joining is something I have never seen done before.

The joining was called Twisted Braid Join. It requires advanced patience and really is a look that cannot be achieved any other way.

It’s funky and filled with 7 different motifs to bring your Stitch-cation Afghan to life. The afghan is 35″ wide by 52″ long.

Stitch-cation is a pattern mash-up of motifs found from two different free patterns found on Yarnspirations which include the Crochet Tucson Throw and Crochet Lenox Throw designed by Treva G. McCain for Caron Yarns. To make it even spicier, I had created two additional motifs for this design.

There are 6 large motifs in this design plus 1 small connector motif.

The biggest tip of all for these. I would complete all of your motifs with not doing the final round for each. I would then lay it out to figure out where you want your motifs in your afghan. Then strategically complete the last round so that it will join its neighbour. The very first large motif you do must be done completely so then next motifs begin joining to that one.

The small connector motifs are the last motifs to be crocheted into position.

The pictures below show each of the motifs completely done for you to visualize but the final round should be joined to the neighbour. Those instructions have been included in our eBook as well as each video tutorial.

There were over 120 examples of this Stitch Along created by crocheters globally. See the Gallery of Finished Examples.

We have a free downloadable eBook called Stitch-cation 2015. Inside the free eBook are all of the written patterns which include tips and advice. All of the patterns have links directly to the video tutorials. You will need access to the internet when clicking the links for the videos for your browser to open.

You are welcome to print your book and/or save it to your computer for future reference.

All Video Tutorials In One Video

Crochet Better Together Afghan Stitch Along

Crochet Christmas Ornament Blanket Inspired in 2016 but not actually officially developed until 2018 is...

Bobble Heart Scarf The Bobble Heart Valentine Scarf was a challenge put forth by Yarnspirations to...

Crochet Advent Calendar I was sitting in Yarnspirations in the late summer of 2017. Sitting with designer...

Stitch-cation Afghan It’s funky and filled with 7 different motifs to bring your Stitch-cation...

Crochet Llama Blanket The Crochet Festive Texture Afghan is the next stitch along with our friends at...

Crochet Fall Stitch Along 2020 with JOANN

Crochet All In the Family Blanket The Circular Fall Mandala now has a sister, Square Mandala. Originally...