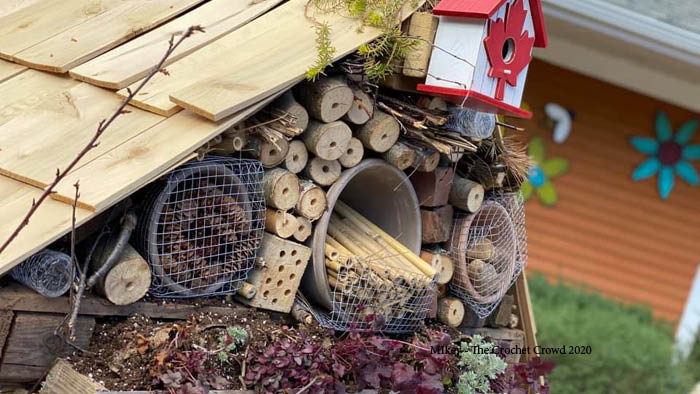 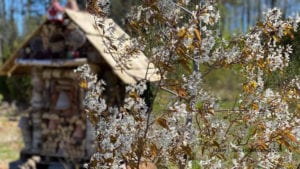 Insect Hotel in the Meadow in Nova Scotia

For summer 2020, I’m building things for the yard to pull me out of the house to get some fresh air, move my body and to have personal creativity.

Daniel has a personal interest in gardening and landscaping. In watching him build the grounds up with trees, scrubs and a variety of perennials, he chooses based on species of animals that will benefit. A strong factor is when things flower and the colours they will turn in the fall.

In order to have so many flowering bushes, the environment has to have the pollinators to turn flowers into food for later in the year for the birds and more. Some fruits of a tree, though are not consumed by humans, are adorned by the birds and more. Sometimes they eat within the same season, other fruits stay on the trees and are consumed in early spring when the migration returns. 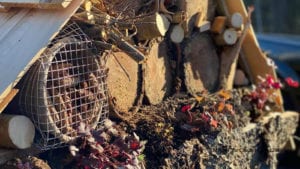 Have you ever looked up the cost to buy a ready-made insect hotel? Here, they range from $20 – $80 and those are just hangable. I see the insect hotels as yard art with a purpose.

Unwilling to pay for a ready-made hotel, I wondered what people have done on their own and the materials they used.

It leads me to discover the wonderful world of building an insect hotel. I never realized the decay can be presented as beautiful art. 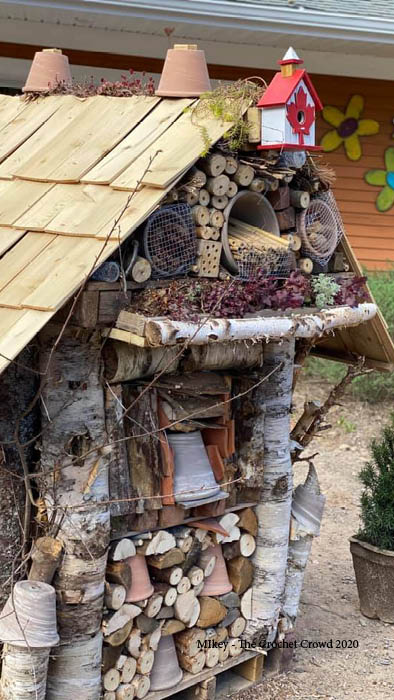 To have the environment balance itself, the conditions must be ideal for insects to gather, hide, nest and become a food source opportunity.

While I have a dislike towards earwigs, the earwigs benefit the fruit trees to protect the fruits. Aphids can ruin roses but can be consumed by ladybugs.

So I had to do a bit of research to understand what insects need and what type of insects I should expect in my region.

For the most part, I have woods at my home where I could collect: 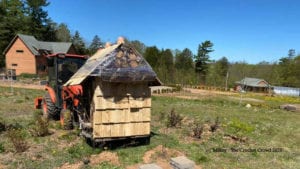 I don’t have experience in building but thought to build it at the studio and have it moved using a tractor. I cut a slid to 3 feet deep by keeping it 4 feet wide. This allowed me to put 2 skids on top in a peak formation without having to alter them.

One side of the hotel has to be closed to prevent the airflow from going completely through.

The weight was much heavier than anticipated and almost at the level that the tractor couldn’t lift it. So it’s heavier than you might think.

If I didn’t have a tractor, I would have built it on a pad in knowing it will be never moved. 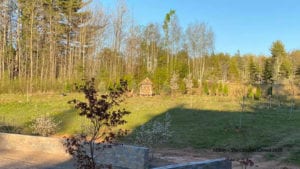 We didn’t want the insect hotel too close to the house. It will attract bees and potentially other creatures that I don’t want to find their way into my house.

With the hotel, the location has to be able to capture the benefits of the warmth of the sun. It should be close enough to food sources for what lives inside. Daniel built a butterfly garden at the end of last year, so we have never seen it blossom as the trees and shrubs were put in at the end of the year.

While the photo it’s bare for all to see, there are tall grasses and much more planted that will conceal its full frontal look.

We can have hurricanes passing through Nova Scotia, so the weight of the hotel is factored to withstand heavier winds that we get as a result of the ocean. It’s pretty heavy, so I suspect it won’t topple over but I don’t wish to find out either. 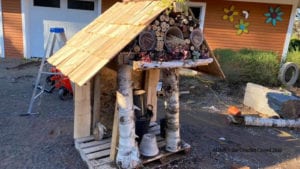 The attic is completely loaded with branches, soil, logs, rocks and even glass bottles. I did the attic first but nearing the end, I realized the structure was getting wobbly. It couldn’t be moved without collapsing.

I had to restructure the base up with cross beam supports including restructuring the pallet it sits on.

While the large logs that visible, they are partially rotted and cannot carry any weight. So they are there, attached but it’s the beams inside the structure that are load-bearing. 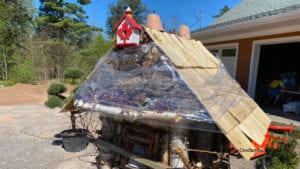 The front and back have a really nice presentation, but during the move, things could fall out if the tractor bounces. I wrapped the upper attic with plastic for moving.

I also added beams to the front bottom section as a precaution.

We were able to move the hotel without any damages. We prepared a base for it to sit on and levelled it before placing the hotel into position. 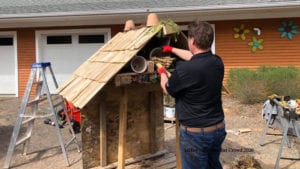 I found this project took me about 20 hours. Puzzling the items into a position was much more work and trickier than I had envisioned.

There aren’t really any wrong answers and ultimately, you have to plan for it.

I used sedum plants. There is an open trough at the top that has some perennials and the water from the trough will leak inside the hotel to provide the damp conditions that insects can enjoy. There are some areas of the hotel that will remain dry.

You need accessible nooks and cranny spaces. Drilled holes of multiple sizes for insects to burrow into. You will see the logs and pieces of wood with assorted holes.

The holes and nooks and crannies have to have a downward slope. This means that when it rains, the holes don’t fill with water but keep the water on the outside. This allows the bugs inside to keep hidden and not drown or get trapped. The roof isn’t there for just show, it’s there for shelter from the rain and conditions. 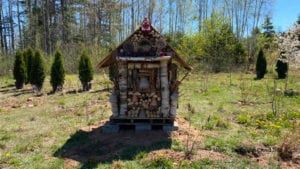 From my research, the insect hotel serves as an excellent winter hibernation unit for the insects. So nothing, from what we can see has moved in. However, we do see bees hovering around it but there’s no evidence that anything has moved in.

The birds eat insects, so we have noticed an increasing number of birds. However, Daniel has planted trees in this baron area of our site.

Our home sits on what used to be a cow pasture. The soil is rich in nutrients. With more trees, the birds can stop by and perch on the trees. They can look around for food.

While the insect hotel will help balance the ecosystem, planting more trees, shrubs and perennials will increase the wildlife naturally without having to lure in the birds with feeders.

For me, this was a really enjoyable home project. It now sits in the meadow and is illuminated by the last sun of the day.

While our property is a large open space, the hotel helps give the property a sense of depth.

I have a large number of sunflowers, lupins, poppies, and assorted species of pumpkins now being grown from seeds. The sunflowers and pumpkins are just an annual but the flowering will feed the creatures later on in the season.

I suspect it will take a year or so before it establishes itself. The benefits of the flowering turning to fruit are worth the wait to see. One can only try. I’m no expert in building, but I am pretty proud of how it turned out. 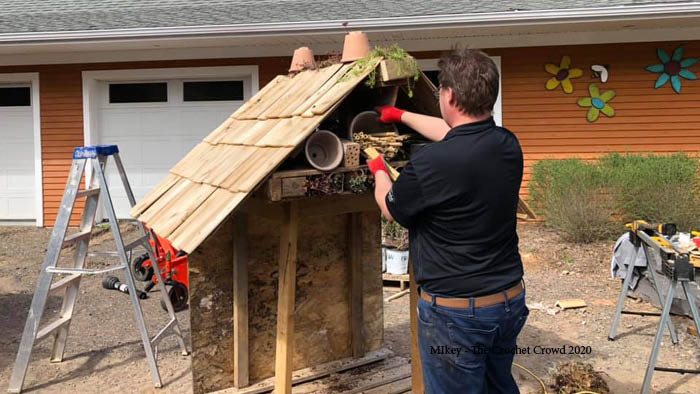 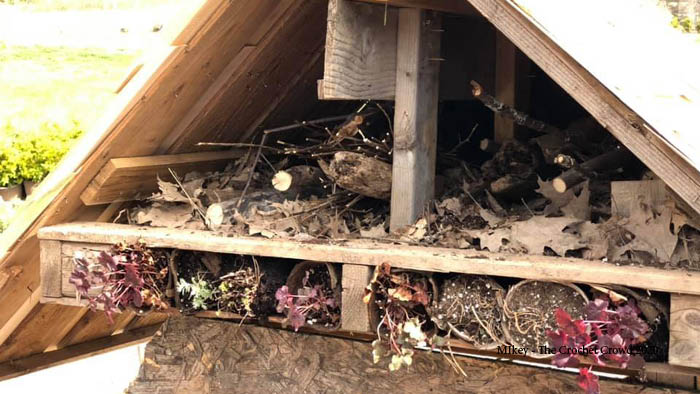 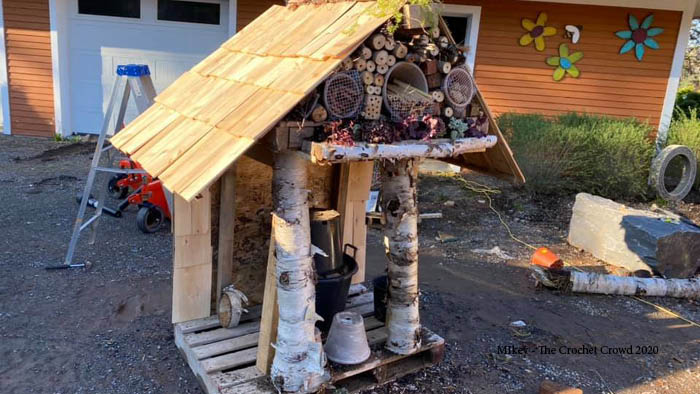 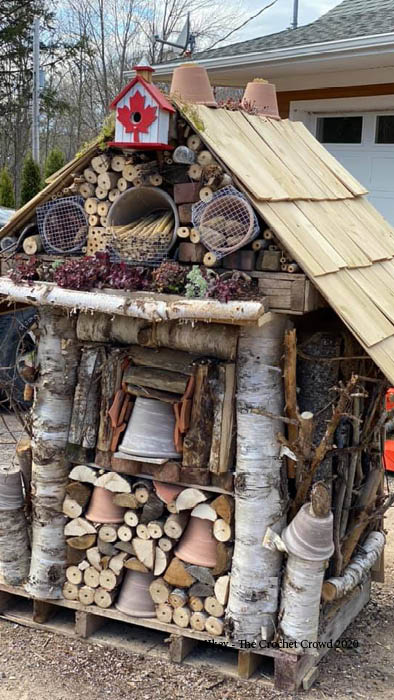 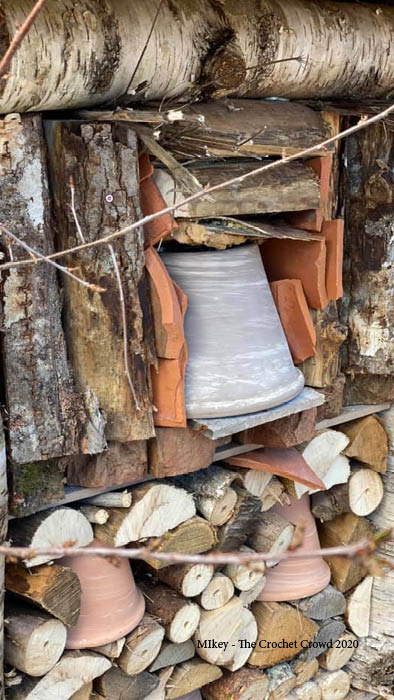 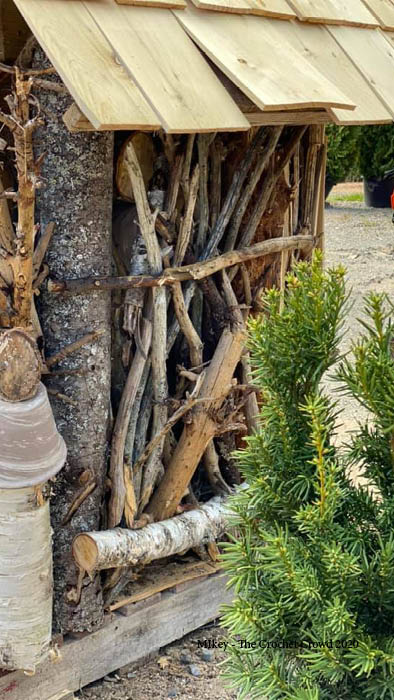 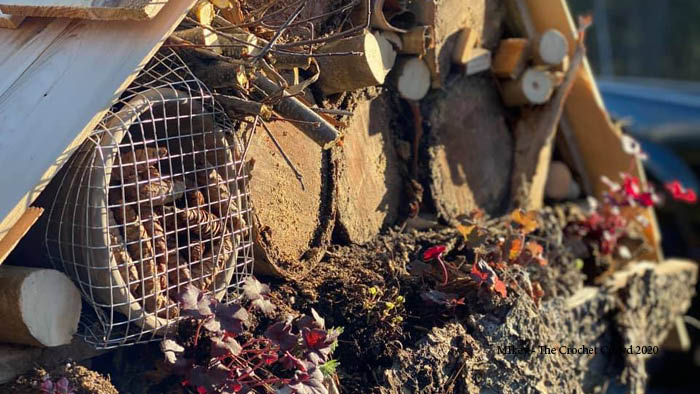 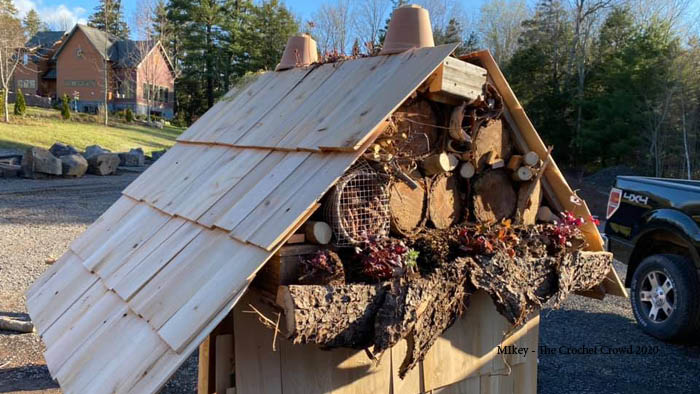 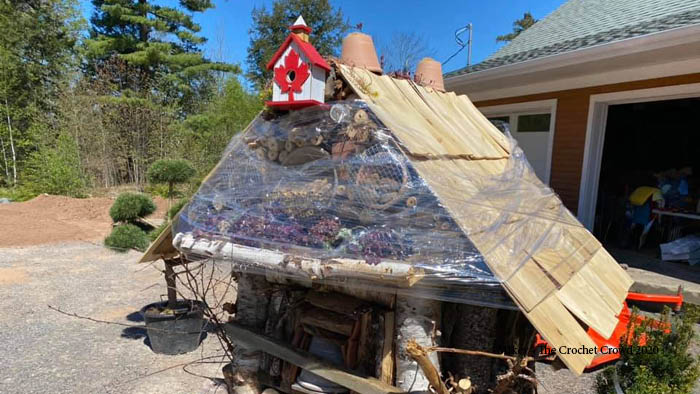 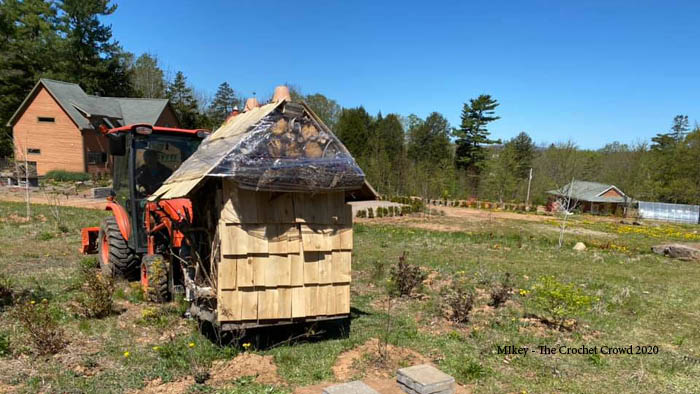 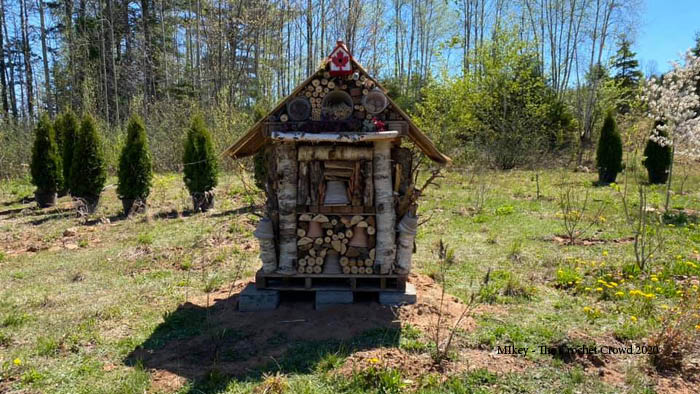 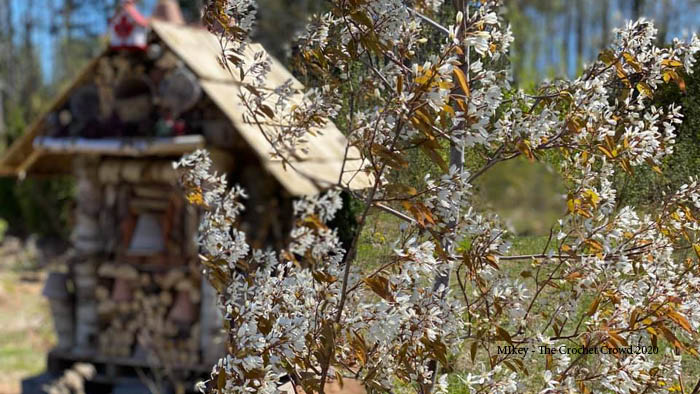 Insect Hotel in the Meadow 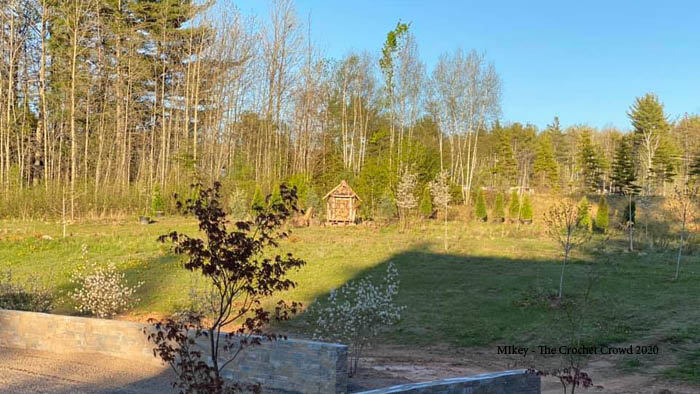