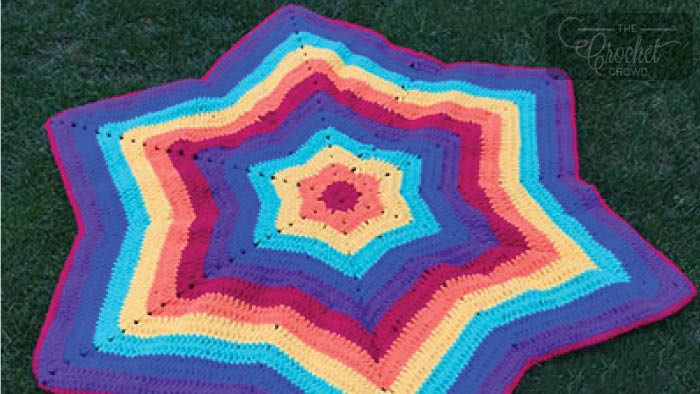 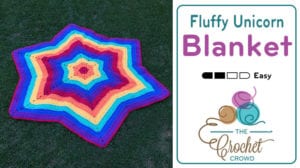 Introducing my Crochet Fluffy Unicorn Afghan featuring the brand new yarn line called Bernat Blanket Brights. This is a 6 point star afghan that took me seriously 9 hours to crochet. Due to the thickness of the yarn, these types of afghans crochet extremely quickly.

I used the colours of the rainbow to inspire me. A crocheter said online to me about it reminding her of Rainbow Bright and then I was thinking unicorns from the Minion Movie as being a Fluffy Unicorn that Gru was trying to win for the girl. This yarn is so vibrant and definitely fluffy. It’s an afghan I would want to cuddle with myself. 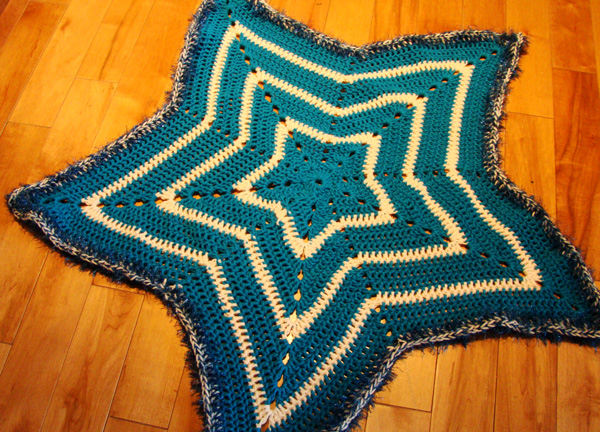 This pattern is an adaptation from an existing pattern on Yarnspirations. The original pattern is called Bernat Star Blanket featuring the extra lovely Pipsqueak Yarn. Originally, I went into the project thinking it’s just a typical star but there is a slight variation which opened my eyes to realize this would be perfect for Bernat Blanket Yarns. Every other row, the space in the center between the points closes up. This means there’s not as many gaps. Typically in stars, we see gaps in the points and in the centre points.

If you see my blue example filmed many years ago, you will see the typical gap spaces in between the points. This afghan design is missing that feature so it appears and is more solid between the points of the star. You can try this version, it’s called the Starlight Blanket. 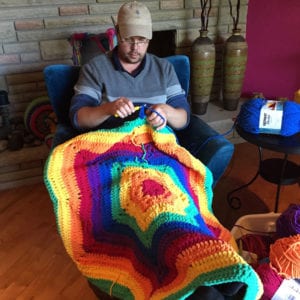 Mikey making the prototype of the Fluffy Unicorn Afghan to figure out yarn quantities.

In teaching for Yarnspirations, I have the ability to adapt patterns with their permission. The original pattern still remains Yarnspirations’ pattern but I have tweaked it slightly for my new version.

I was exceptionally conscious on the amount of yarn needed to make this afghan. I used up as much yarn as I could without having you to buy a second ball of any of the colours. You will need to pay attention to the final rounds as I had to change the 2nd last round to ensure you had enough yarn to get all the way around.

Rainbows are always in the same order. If you want to change up the colours, that is completely up to you. I used a total of 6 balls of Bernat Blanket Brights Yarn. The rainbow colour order is Red, Orange, Yellow, Green, Blue and Purple. Usually Red is first and purple is last. That’s up to you on the order you want. 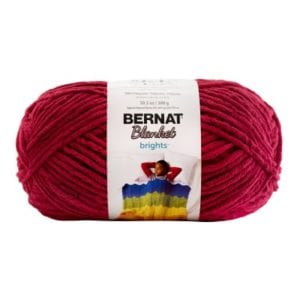 You can substitute for any of these brands as long as you keep the yarn in the solid colour format. The variegated yarns have less yardage and you will run out quicker and may not finish your project.

Each one of these products have different format sizes of balls. You will be looking for the big ball of 300 grams to complete this afghan.

You will need 1 Ball, 300 g Each of Bernat Blanket Brights: 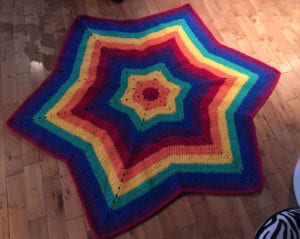 Note: Ch 3 at beg of rnd counts as dc throughout.
Beg at center, with Colour A, ch 5. Join with sl st to form ring.