I am totally surprised at how warm this is to wear. This can be worn in different ways which makes it very versatile.

Lower The Hoodie and Wear As Cowl

Rests Beautifully Around the Neck

Back View When Hoodie is Down

I will tell you how to customize any cowl or turtle neck you have with my hoodie design in the pattern below. It works for the perfect increase and rollback of the hoodie.

Optional Faux Fur Pom Poms. I picked mine up at Michaels Stores.

The trick to these is understanding that the cowl has to be inserted up through the interior. This means the hood needs to be crocheted on the cowl’s wrong side so both are showing right sides when wearing.

How the Toodie is Folded

This is how the Crochet Toodie looks when it’s not folded into its formation.

The cowl is then rolled inward up from the bottom to inside the hoodie. This means the cowl’s RS (Right Side) will face outward.

Once the cowl is rolled to the inside, it will be ready to wear. 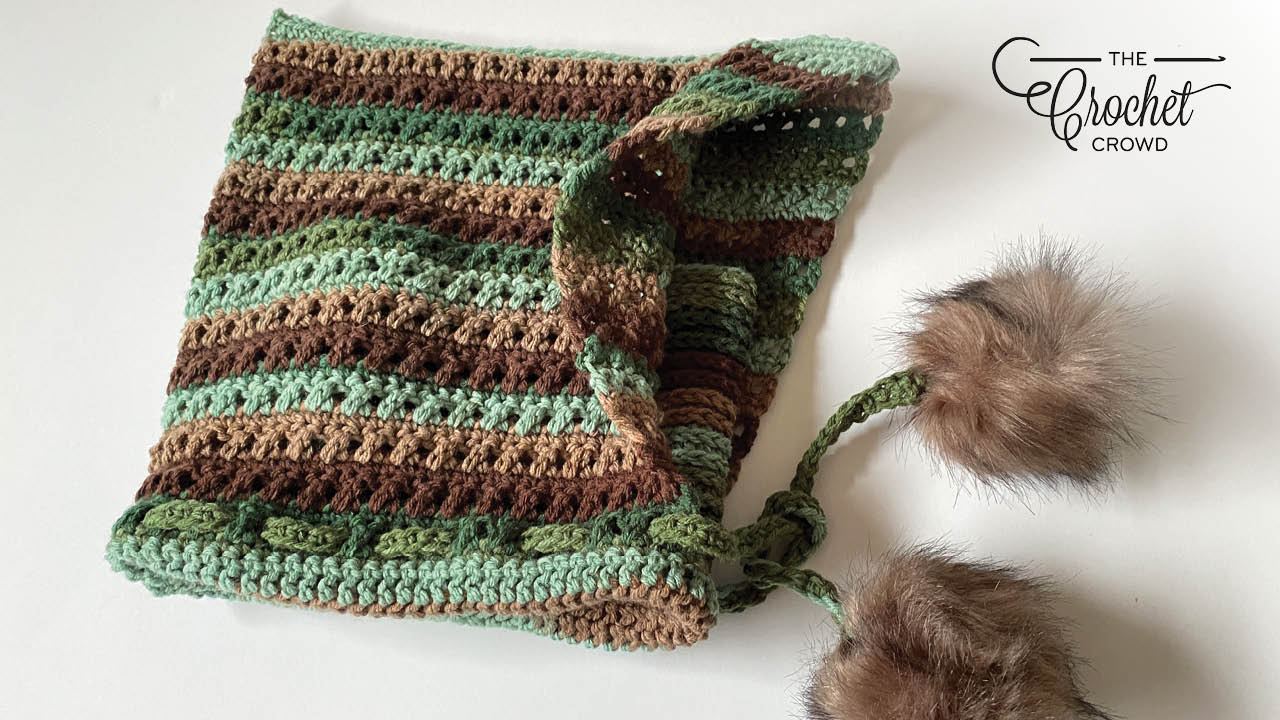 Crochet Toodie Rolled Inside Ready to WearYou can add an optional tie and sew on pom poms for an elevated look to your crochet toodie.

During the testing trial while designing this. Daniel suggested adding a tie and pom-poms to finish the look. You can decide that for yourself. You can add the tie without pom poms as well.

Adult size cowls that are tighter to the neck are generally between 55 to 70 sts in the round using 6.5 mm / K/10.5. The example I am wearing has 70 sts. You will be able to tell after the first round if you want to change the size.

Toddler sizes are about 40 chains. You can also chain in an even number and test after the 1st round to see.

It’s important to keep an even number for your stitches for my design. No matter how you customize it, the hood will work out.

Stitches Used In This Project

Ch 70 (or any even number that best suits you). Join with sl st to first ch to form ring, being careful not to twist chain.

Cowl is worked in continuous spiral. Do not join at end of rnds. Place marker to note beg of rnd and move each subsequent rnd.

2nd rnd: 1 hdc in back loop only of first sc. *1 hdc into horizontal bar (see diagram). created below next st in prev rnd. Rep from * around.

3rd rnd: *1 hdc into horizontal bar created below next st in prev rnd. Rep from * around. Rep last rnd until work from beg measures 8”.

Final rnd: *1 sc into horizontal bar created below next st in prev rnd. Rep from * around. Join with sl st to first sc. Fasten off.

Please note you ended up with the same number of stitches as your beginning chain.

The hoodie section is added to this cowl but you have to pay attention to how you do that.

You need to flip the cowl inside out before you begin the hoodie section.

If you do not flip the cowl inside out, once you position this to wear it, the cowl’s wrong side (back of cowl) will be showing. When the cowl is pushed up through the hole, the right side of the cowl (front of the cowl) will face out of the front of the hoodie.

If you have changed the count, ensure that the 1st row below has an even number of single crochet stitches in order to make the rest of the pattern work.

Join yarn to any st near the middle of the cowl.

1st row: RS. Using instructions above for orientation. Ch 1, 1 sc in each st around leaving the last 2 sts unworked. Turn. 68 sts or even number if you customized.

This has been designed so the increase is on a single crochet row so it’s easier to do without much thought. The x-st rows have no increases.

Rep 3rd row one more time. Do not fasten off.

Fold the top of the hood directly in half.

Final row: Ch 1, 1 sc going through both sides of the hook all the way across. Fasten off and weave in ends.

Weave the tie in and out of the first x-st row. Then sew on pom poms to the end of the ties. You can also leave the pom poms off.

Roll the cowl up through the inside so it’s inside the hoodie as shown above.

It’s only been filmed in the right-handed version. It’s the Crochet Buffalo Plaid Hat.