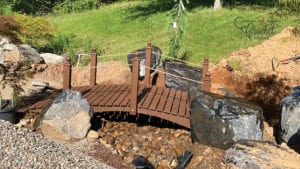 The Garden Arch Bridge is another summer project for the garden. Arching over a dry river bed where the runoff from the property travels. This part of my summer 2020 journey of adventuring into woodworking as a side hobby when time allows.

Daniel said he needs a bridge to go over the ditch that helps control the water flow during rain and winter melt. He wouldn’t settle on anything but an arch bridge.

I wondered if in the woodworking field that people do free patterns for projects like I do for crochet. I found Garden Arch Bridge Plans. I downloaded the pattern and formed a shopping list and looked at what we already had here on the grounds.

We made a mistake during purchasing wood and saw deck boards. We didn’t pay attention to the thickness of those decking boards. They were supposed to be 2×4 planks. We didn’t notice until the bridge was complete and it complicated matters.

You should know, I studied engineering and went to college, so measuring and problem-solving in this area isn’t new to me.

Using the measurements and using screws. I was able to plot the arch onto the wood without any difficulties. Using screws at the cut points and using flexible metal use it as a line to trace. I did both plotting at the same time for each measurement so both are identical pieces.

The challenge was to cut the pieces with a jigsaw. The first arch was a bit rough but I learned my lessons and did the second arch in one pass.

Creating the cross beams and exactly measuring it precisely so the bridge has an exact mirror down the centre will make my life easier in the future.

I stained the pieces as I went to make it much easier.

Knowing that it will need to be assembled, I thought it would be easier to pre-drill all of the frame and post holes in advance! What a pain on the 4×4 posts! Hated it but got it done. I even cut the holes for the rope railing.

To make it easier, we did a rope railing as I was concerned I couldn’t get the shape right. Being in Nova Scotia with roping and the sea seems to make sense for our grounds.

I hand handed with a sponge sanding pad and then washed all of the planks and posts to remove off any imperfections. It allowed me to inspect each piece.

I then rolled the stain onto the components, using a brush for touch-ups if needed.

I set the boards on the frame, without screwing them into position and had to wait for Daniel to do his landscaping to prepare it to arch over.

Canada Day came and thought I could take half-day off work.

Daniel dug out the ditch a little deeper. We put in landscape fabric and then loaded some riverstone into the trench. Using the survey tool Daniel uses on the grounds. Both sides of the bridge were levelled. Using bricks we had from the patio that was removed, they were positioned and levelled.

The goal was to build the bridge over because it may be too heavy to build it and lift it by hand.

I assembled the bridge. The post holes were already pre-drilled and so was the frame. Using carriage bolts, the posts are not supports for the bridge, merely visual accessories. Using a leveller, I levelled the posts perfectly vertical to how it sits across the ditch. I didn’t want to put them on before hand and realize the bridge posts don’t look straight up.

I drilled the holes first, then screwed in the boards to the frame. This prevents the boards from splitting. Also, the instructions stated to do that.

The bridge was unusable. The planks were so flexible, that it wouldn’t take much more weight for me to snap them as I walked. It was then we realized we subbed the plank boards and they are much thinner than they should have been.

I was deflated. The bridge needs a middle support beam to prevent the flexing.

So the bridge had to be taken apart but Daniel thought we could lift it out of position and I could crawl underneath it to add more support beams.

I crawled under this taking measurements. Getting the same arch curve was my nemesis. I looked at the off-cuts I had left over to see if I could use any of it to create new beams. In looking at the off-cuts of the archways, I realized they have the exact arch shaping.

I created a middle beam but the beam had to be in 5 parts. 2 long boards, and 3 short. I plotted the off-cut arch. I was able to trace the arch curve onto the new pieces.

I tested the new pieces and really didn’t have any trouble. I even figured out the ends of the angle of the pieces to be 7.5 degrees. Fits like a glove.

I stained up the new pieces and crawled under the bridge and assembled the new bracing.

We lifted the bridge back into position and then pre-drilled the holes and screwed the centre of the planks to the new centre beam. The bridge went from a potential trampoline to a solid bridge with the new beam.

I learned a lot of lessons but thankfully, I had a free pattern to use to help me make the pieces. Next time, double-check the wood at the lumber yard.

Landscaping around the bridge can now be completed and gardens built out.