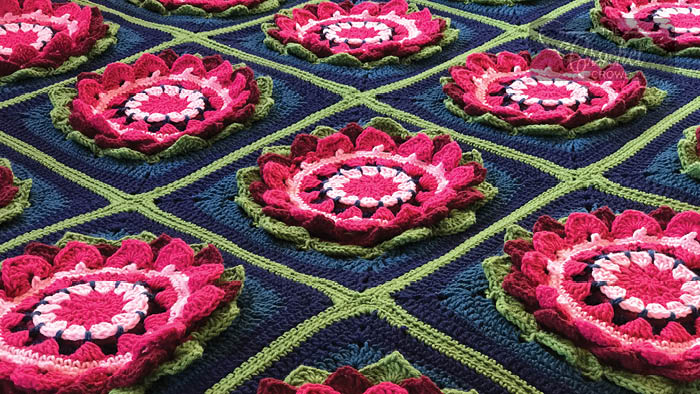 The Crochet Water Lilies in August Afghan is a design by Michael Sellick from The Crochet Crowd. Originally, this is part of the Flora Afghan and was released. With the thanks of crocheters who helped proof the pattern, a suggestion came back with changing rounds 11 – 16 from a crocheter by the name of Granny Jedi. The thoughts from this crocheter were spot on and solved two major problems. So the pattern has been written here without worry about tucking the petals or worrying about gaps for the petals to fall below.

Using Caron One Pound, the pattern itemizes the yarn that was used and the exact colouring. There is no tutorial for this version as there were just sudden changes to make your life easier. Maybe in the future, there will be.

Crochet Hands Full Mittens for 8 / 10-Year-Olds Crochet for those around you who may be in need in the...

Crochet Hands Full Mittens 2/4-Year-Old Size Keep the young people in your life warmer this winter with a...

Crochet Woven Pillow The Woven Look Pillow is very similar to the basket weave concept. The pattern has...

Crochet Doggy Comfort Blanket Pattern Whether it be for your sofa to protect your surface, or maybe...

Travis the Crochet Giraffe One of our contacts at JOANN Fabrics & Crafts is Abby. A spirited young...