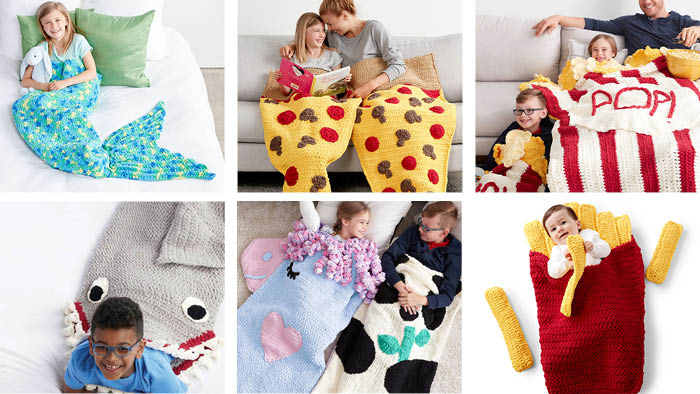 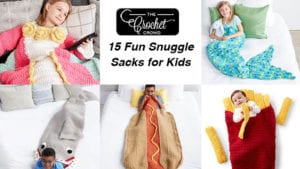 Crochet snuggle sacks are a novelty and make great gifts for kids. Some of these have additional instructions for adult sizes as well.

Some of these are more complex while others are pretty simple. I believe the Crochet Mermaid Tail took me about 9 hours and was one of the quickest projects of the lot.

My favourite by far is the Crochet Small Fry. I have it hanging in my yarn studio. It’s adorable.

Below, I will give a direct link to the pattern and my tutorial is right underneath. 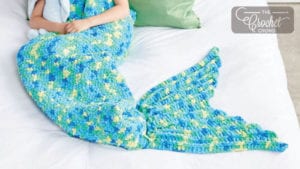 The Crochet Mermaid Tail is pretty straight forward. I added extra information to avoid the slip stitching line that would occur down the side.

The tail is made up of two halves and then sewn together to form the shape. I believe 100’s if not 1000’s of these Mermaid Tails have been made already. 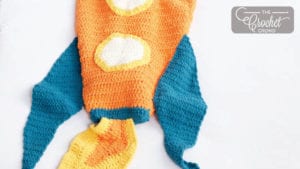 The Crochet Rocket Ship is made up of several pieces that form the ship. It’s much easier to crochet than one could imagine.

I’m a Star Trek fan, so this ship is iconic of the old movies and the colouring is just fun. 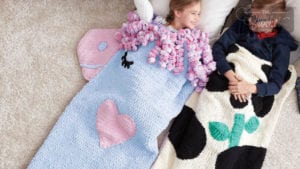 I mean who doesn’t love a unicorn. This Crochet Unicorn Snuggle Sack is pretty straight forward.

The unicorn is a straight shot up from the bottom to the top fringe. There is some minor growing at the bottom. Then, you will crochet the nose as a separate unit and sew it on.

In the photo, you see the boy with the Knit Panda Snuggle Sack. I have provided the link just in case you want that pattern too. 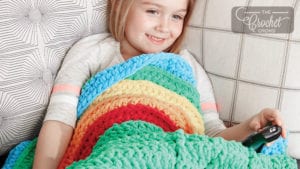 Crochet Over the Rainbow Snuggle Sack

4 – Over the Rainbow Snuggle Sack

If you have ever seen the movie of the Wizard of Oz, you may just appreciate this Crochet Over the Rainbow Snuggle Sack.

The crochet snuggle sack tells the story from the witch to the yellow brick road. It’s a miss mash of ideas all in one snuggle sack. It’s pretty darn creative. 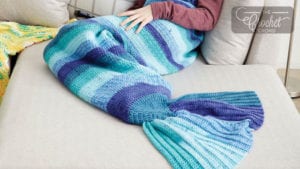 There was a demand to have the Crochet Mermaid Tail using 4 Ply regular weight yarn. A pattern was developed by Bhooked for this.

It’s using Bernat POP! Yarn and the colours as shown come out of the ball as is. 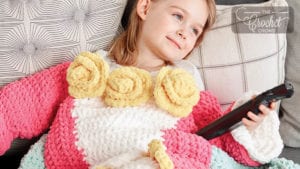 Oh to be a princess for an evening. This Crochet Princess Dress Snuggle Sack is more complex than the rest of the projects in this category. There is a lot of add ons and sewing involved. Truthfully, based on the concept it’s expected.

This takes a bit of time to make, so be sure to plan ahead if gift-giving is in your future. 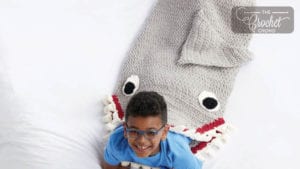 When Yarnspirations first started coming out with the Snuggle Sack Series, the Crochet Shark Snuggle Sack. I’m a little young for the first-ever Jaws that came out but it’s a timeless classic of fear back in the ’70s. I mean, who wasn’t scared to go into the water. I grew up on the coast of Lake Huron. We were in fear of sharks though you cannot tell an 8-year-old boy the difference between freshwater and saltwater.

The tutorial will take you through a technique of avoiding slip stitching to hide the line. The tail is easy to make and the fin, of course. 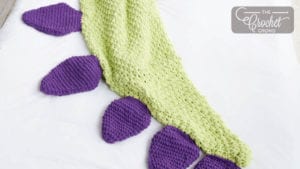 The Crochet Dino Tail Snuggle Sack is a simulation of a dinosaur tail. The tail appears to be rough through the usage of two different stitches. It’s pretty soft.

The scales on the back of the tail are different sizes for keeping the tail in a proper perspective. 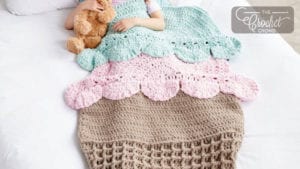 The Ice Cream Snuggle Sack is one of my favourites as well. I cannot explain in enough detail how happy I was in crocheting this project. It’s beyond cute.

I ended up converting my Snuggle Suck into an adult crochet Halloween costume by leaving the bottom unsewn. I sewed up the top for a neck opening and left space for arms.

The Snuggle Sack has since made it’s way to the wall in my yarn studio. It’s the same one that I made in the tutorial. It was also the costume of my travel agent. I made her a Cherry Hat but I never wrote the pattern, just made it up on the fly. 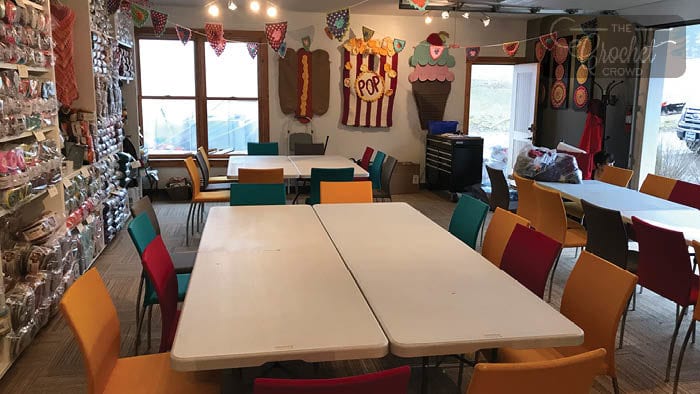 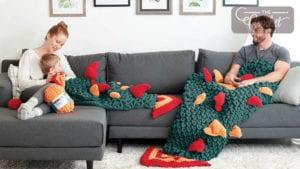 The Crochet Skein of Thrones Snuggle Sack is pretty neat. The tail involves the crocodile stitch and can be a bit labour intensive. To a Game of Thrones fan, this could be a great gift. This is also available in adult sizes as well.

The sack is a one-piece unit and the extra bottom and motifs are sewn on afterwards.

Sorry, I’ve not filmed this one. 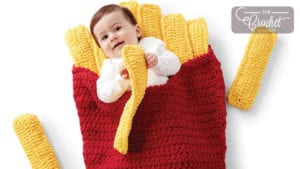 Another favourite of mine is the Crochet Small Fry that is intended for photo props. Yes, I got to McDonalds and yes, I see my large fries here.

The sack is 2 pieces that are sewn together. There are extra fries made that cushion the back of the head for the baby.

You will see 3 extra fries not sewn in here, those are not part of the pattern but were made for the photoshoot. If you want extra fries, you need to get an extra ball of School Bus Yellow.

I ended up using my Crochet Small Fry as wall decor. It would be really cute for a kid’s room too. 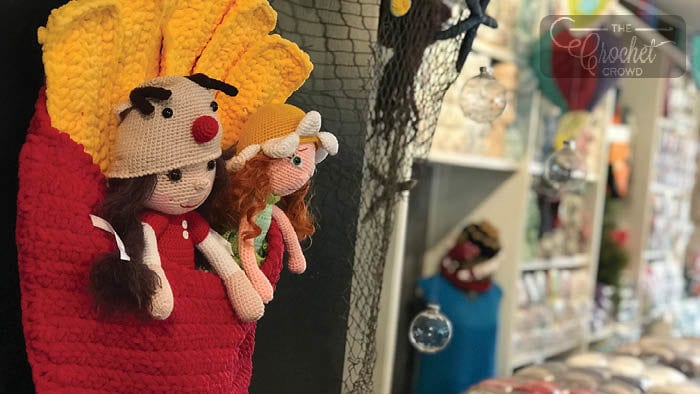 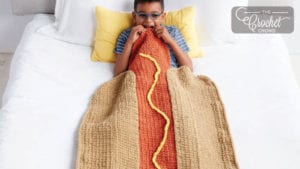 The Crochet Hot Dog Snuggle Sack is just crazy and whimsical. I mean, who doesn’t want to be in a hot dog to watch the ball game or sports on TV.

You will crochet two wieners and 4 buns that make up this project. You can improvise on the crochet toppings. 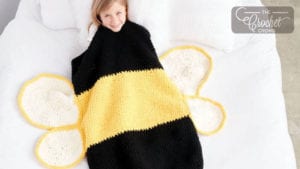 Of the snuggle sacks, the Crochet Bee Snuggle Sack was the least popular of the lot. Seems like bees are getting harder to survive in today’s farming situations. Here, I live in a valley where bees are necessary to produce crops. There were fewer crops last year due to a lack of flowers that were pollinated on the trees.

So we have to give bees the honour they deserve. So let’s get buzzing and make a Crochet Snuggle Sack together. 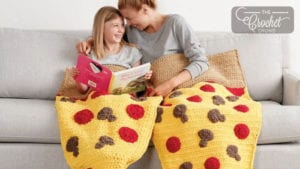 The Crochet Pizza Snuggle Sack has been designed in both Child and Adult Sizes. The shaping is pretty simple and the toppings are pretty quick.

The sacks crochet from the bottom up to the top. The sauce and crust are crocheted with the sack. The back of the sack is all in crust colour to be authentic. 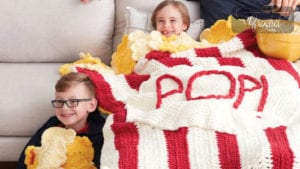 I saved the best for last and that’s the Crochet Popcorn Box Snuggle Sack. This pattern was easy to make and I ended up crocheting extra popcorn to make it more full.

I ended up converting mine into a Crochet Halloween Costume. In fact, I converted the Hot Dog and Ice Cream to Adult Crochet Costumes.

You will notice my example as more to the Pop Logo as I improvised the pattern just a bit. It’s one of my favourite crochet projects of all time. 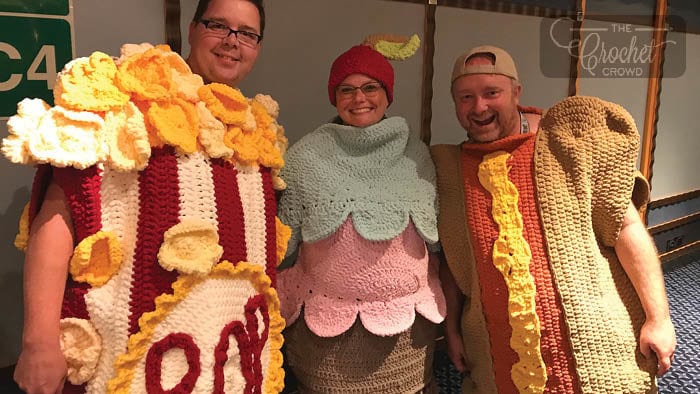 We Ideas for Pillows Too