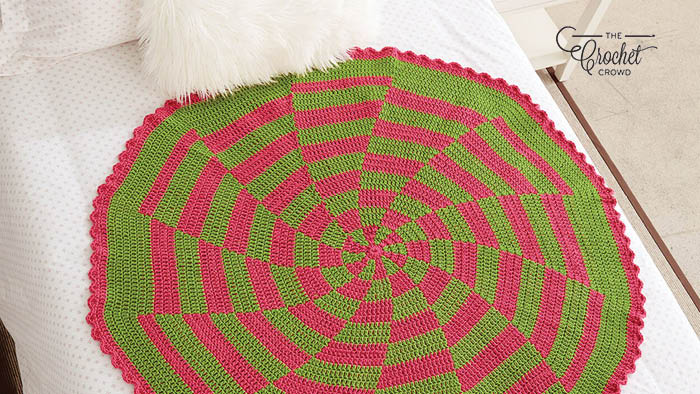 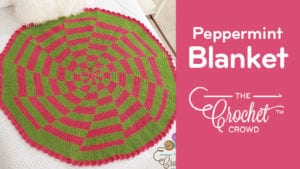 In May, Yarnspirations asked me for a Summer Stitch Along as we had done the summer the year before. Without a lot of notice, I hammered together the Peppermint Afghan. It surprisingly took off with popularity. It was a pure fluke. Introducing the Quick & Merry Crochet Along with Yarnspirations called the Crochet Peppermint Pinwheel Afghan.

The pattern is a shaped round afghan that measures 48″ diameter. Originally intended for Toddler to Lapghan size of the project using only 2 balls of the Caron One Pound Yarn. The concept was simple, to my point of view, design an afghan that is more of a holiday accessory to be festive on the sofa or chair. However, using yarn that is durable and long-lasting to use year after year during your festivities.

The project is using a technique called Tapestry Crochet. It’s the art of dropping one strand under the stitchwork and using the other to do the stitch. When the colour changes, the dropped strand is picked back up and the other colour is dropped.

The project has possibilities. If you have more yarn than what I have suggested, you can go as big as you want because the afghan is designed to sit flat.

I gave clues for 2 alternatives for you.

Option 1 – I showed in the tutorial how to start off so the center 1 colour in the photo is actually each of the tips of the pinwheel right to the center point. The mystery is written as you see it in the photo, but in the video, I show you how to get the points to all meet up in the middle instead of waiting after round 1.

Option 2 – If you prefer to do an afghan that is a solid pinwheel instead of being broken up. Very much like the Austin Powers Time Machine idea, we will accept your pictures if you want to make your pinwheels solid. However, for ball count, you still have to honour the 28 rounds suggested because you will run out of the colour. However, if you have more yarn available to you, you can always make it bigger.

Yarnspirations collected the photos for this challenge. We have no pictures on file of finished looks.