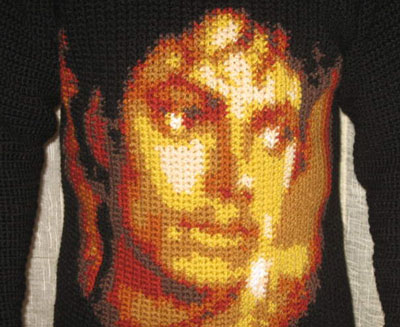 I learned of Todd Paschall through a friend, Veronica, who was working on an heirloom portrait of her parents at the dinner table at their wedding. The picture dated back to the 50’s. She was crocheting a replica as an afghan and using a pattern created by Todd.

Crochet By Numbers is an online service to convert photographs to graph format.

I was taken back by the detail. I watched her gladly go through the stitches. I was blown away by the detail of the pattern but how simple it was as well. I was floored at the 45 pages of the pattern stitches required, but as Veronica demonstrated to me, it’s not as daunting as one might think. I was amazed by how fast it was too!

Other Services to Consider

Todd’s patterns take the mystery work out of the photograph. There’s no counting of boxes in a diagram. So you don’t have to sit there and count really tiny boxes to ensure you get the pattern right. Todd has simplified the process.

To protect his methods of achieving the pattern, I am choosing not to elaborate on how he does what he does. His patterns range from $75 which includes an online class on how to do his methods. He will also create the pattern for a photograph you have submitted. He’s great for giving tips on what kinds of photos work the best.

Very bluntly speaking, most crocheters will choke on his price point but I am going to defend him here. He’s figured out a method that makes the patterns incredible in detail and so easy to follow. The picture you will most likely crochet will be an heirloom which will have a priceless quality to it. His pattern pricing is extremely reasonable considering the details and customization qualities.

Veronica was commenting on how nice Todd is to communicate with. She ordered 5 patterns from him once she realized how simple his method was. I think she is hooked but in a fabulous way. She’s even smiling while crocheting which shows her enthusiasm and personalization to the pattern. Occasionally, she rests the afghan from a distance to see how she is progressing as it’s not always easy to tell from close up. She is going to frame her afghan as a wall hanging afterwards.

This is on my bucket list to try myself. I won’t be able to teach this on YouTube because I don’t ruin his business, but I am looking for the perfect photograph possibility of Riverstone (our kitty) to do for a keepsake for Diva Dan. It would be a lovely addition and showpiece for crochet creativity. To learn more about Todd, visit his website at Crochet by Numbers.

PS. This is not a paid advertisement or endorsement. Photograph courtesy of Todd Paschall, Crochet By Numbers.

Comments (4) on “Crochet By Numbers by Todd Paschall”