How Caron One Pound Yarn is Made

How Caron One Pound Yarn is Made 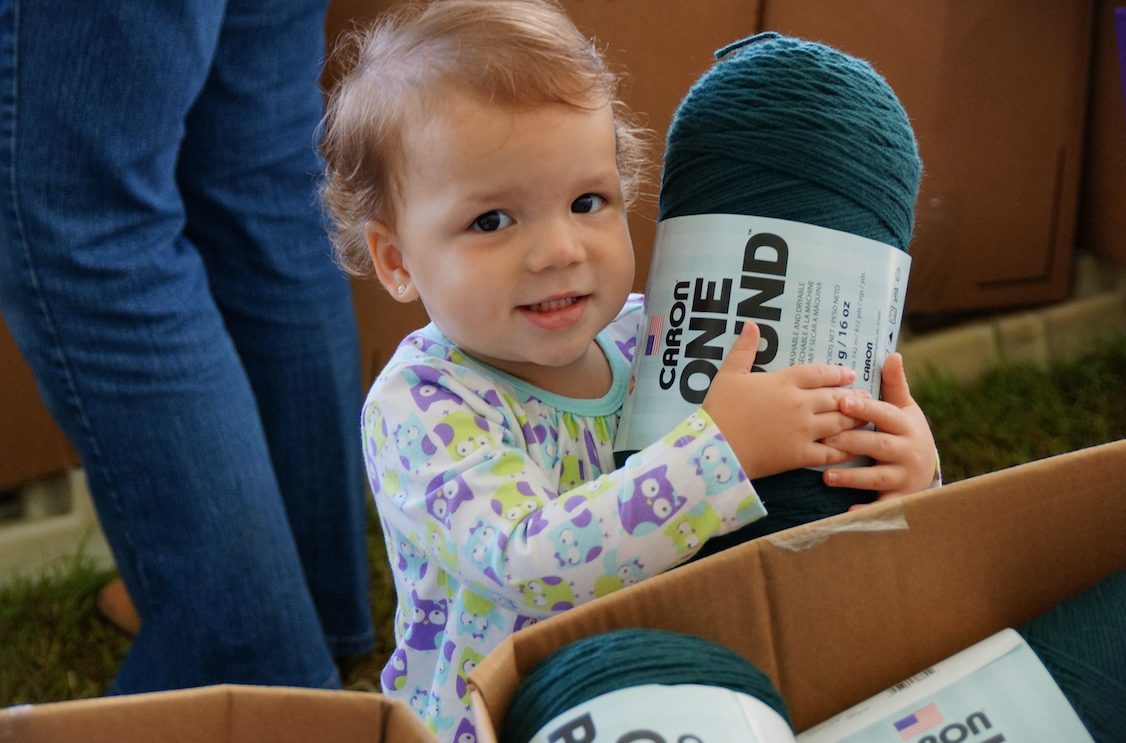 Have You Wondered How Yarn is Made?

Today, I am going to show you a rare behind the scenes look at how yarn is made. This article is showing the process after the yarn is spun. See detailed pictures. Ivy, pictured to the right, is a youngster who captures our emotions when finding that special yarn on the shelves. How does the yarn get made so that you can find it on the store shelves?

I will add commentary to steps based on what I learned during my plant tour of Caron Yarns in Washington, North Carolina. We were granted rare permission by Spinrite Yarns LLP to show you the process with photos we took during our plant tour. Employees involved in the process have been omitted from our pictures to protect their identities. Now that I have the legal stuff out of the way, let’s show you a rare look behind the scenes.

The Caron One Pound Journey

Caron One Pound is USA made from spinning the fibers to forming the skeins. You may be surprised how automated the process is. You would not believe how many millions of pounds of yarn are produced in the USA each year.

The Caron Yarn Plant, division of Spinrite Yarns, is located in Washington, North Carolina. To say the facility is massive is an understatement. I was proud of my yarn collection but this factory has nothing on me when I examine how much yarn is truly there. It’s where the yarn fairies live before you see it on the shelves on your local store.

There are four major processes of yarn manufacturing.

This facility does not deal with the raw fibres, dyeing or spinning of the yarn. This process is done at another location in the USA. Raw acrylic is created, then dyed to the approved colour. Once the fibres are ready, the yarn is spun into the yarn you see on the shelves. Speaking to experienced workers, the really messy and hot labour intensive element of making yarn is the first three processes. Don’t get me wrong though, the workers in the packaging division are working extremely hard as well.

From the plant that does the raw fibres, dyeing and spinning comes in large crates of loosely packaged industrial cones. These cones are wrapped extremely tight and you would not recognize the yarn as Caron One Pound Yarn at this point because the yarn appears thin. These cones are heavy containing approximately 10 – 12 One Pound Skeins Each. 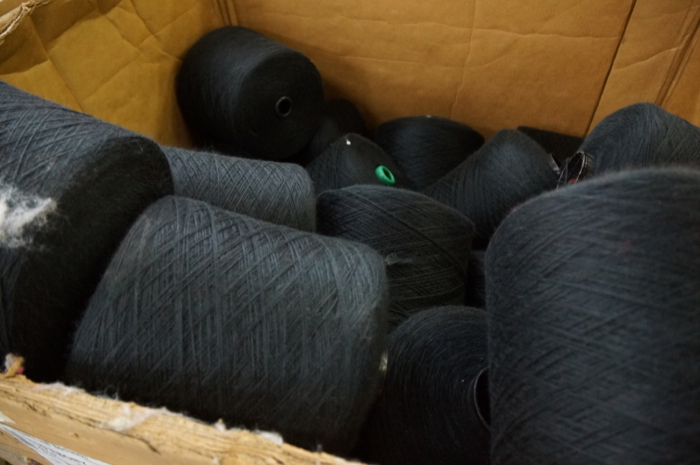 Most of the machines to create one colour consists of only three employees: 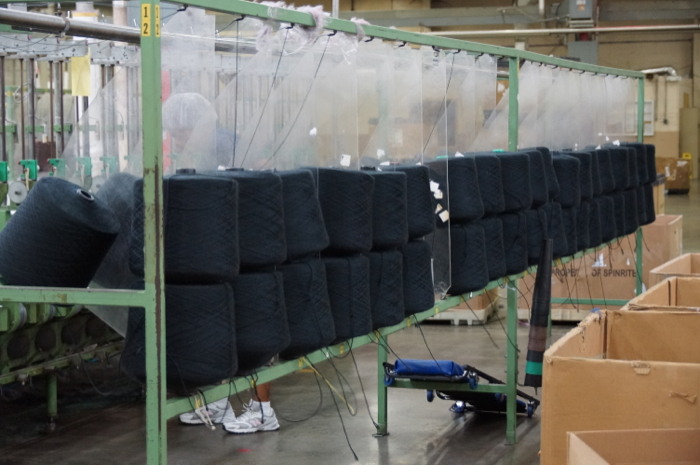 Cones Loaded to Machine, Back of Machine 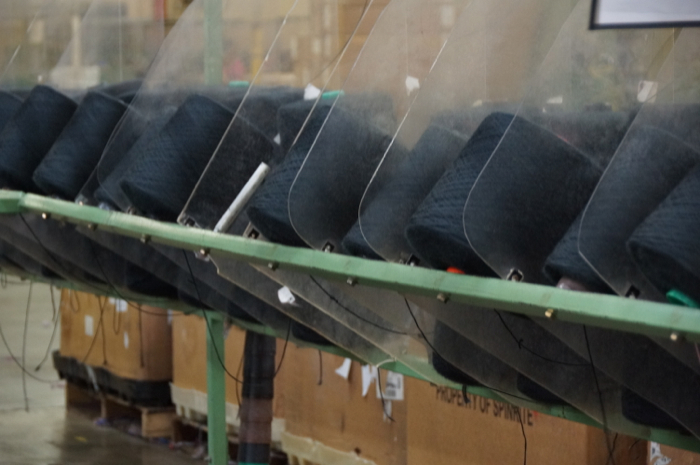 The loader contains 3 industrial cones per strand that is feeding the machine. As you can count, there are 19 holding spots allowing 19 skeins to be produced at one time on the machines.

So how long do one of these cones last when being packaged?

Approximately 10 – 12 minutes before the entire cone runs out. The machines move so quickly that there are three cones in place for each winder so that the machine never runs out of yarn. The 1st worker is constantly removing the empty cones and replacing with new cones.

The cones ends are tied together. As the machine pulls the yarn off the cones at a rapid speed, when the cone runs out, the end is tied to the next cone to instantly start the next cone without having to feed the entire machine section where the yarn is being wound.

Have you ever seen knots in the yarn balls? There are two reasons: 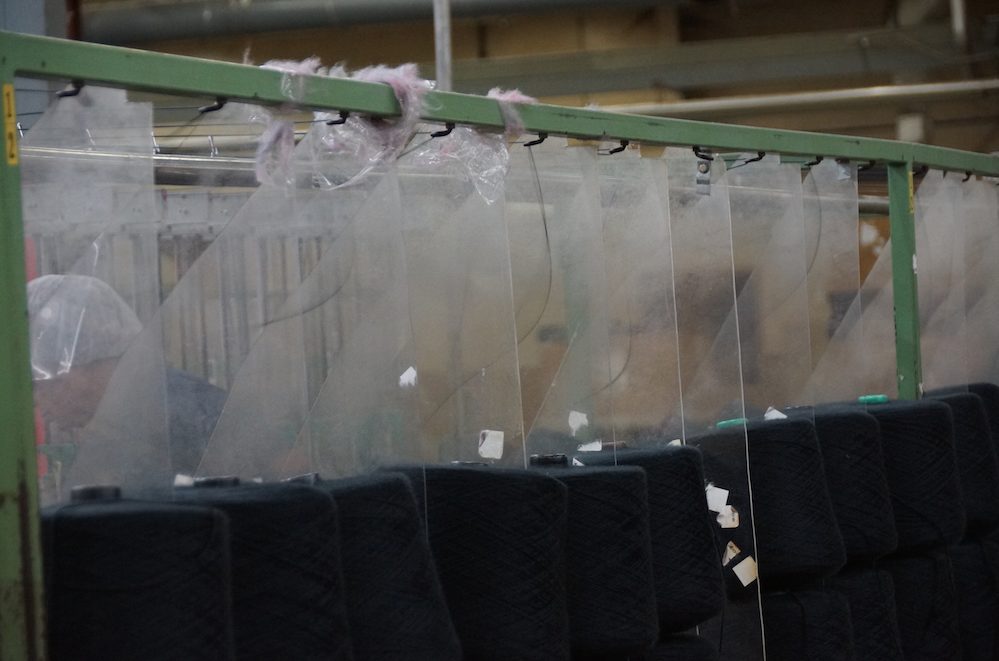 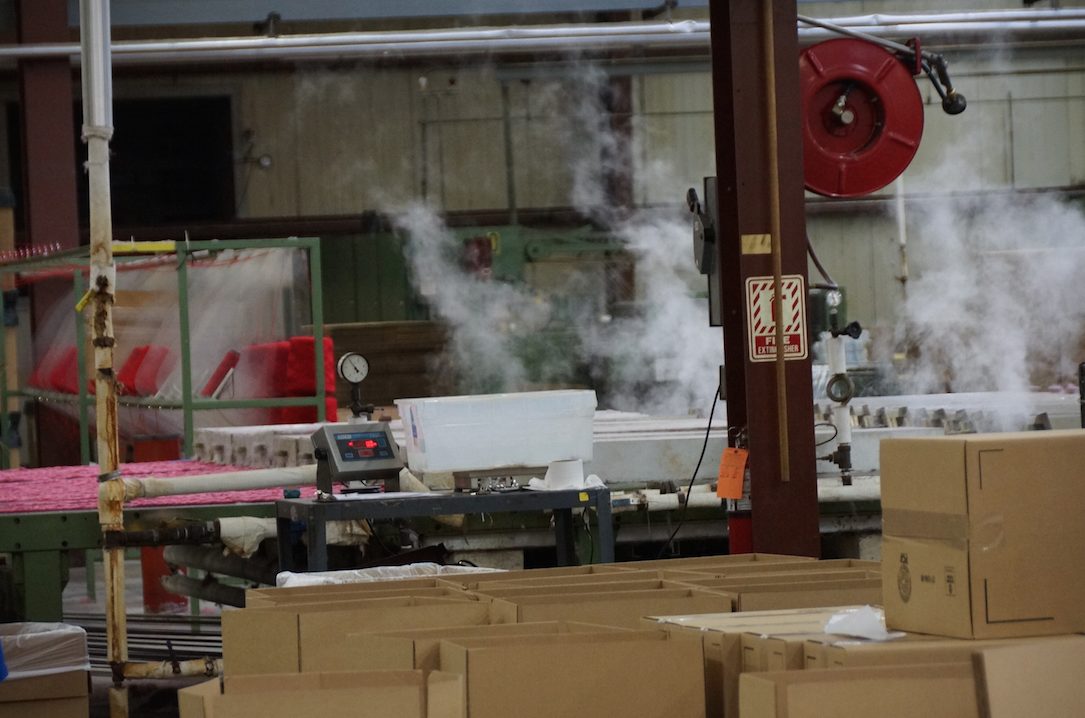 The yarn laid onto the conveyor where it will go through a steamer. 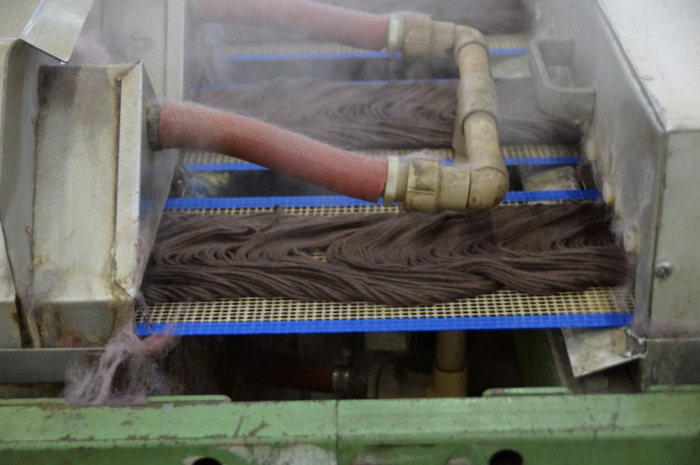 Notice how the yarn is laid down onto the conveyor.

The industrial cones are wound extremely tight. It has no stretch and is thin in appearance. It is wound thin to make it cheaper to transport and deal with during packaging.

The yarn strands travel up over the machine and a machine lays down the yarn in a circular motion so that the yarn can be exposed to a blast of steam. The steam instantly revives the yarn to puff it up.

The conveyor moves the yarn down to the dryer to dry the steam blasted yarn to finalize the final look of the yarn. The yarn continues to rapidly dry as it heads to the winders. 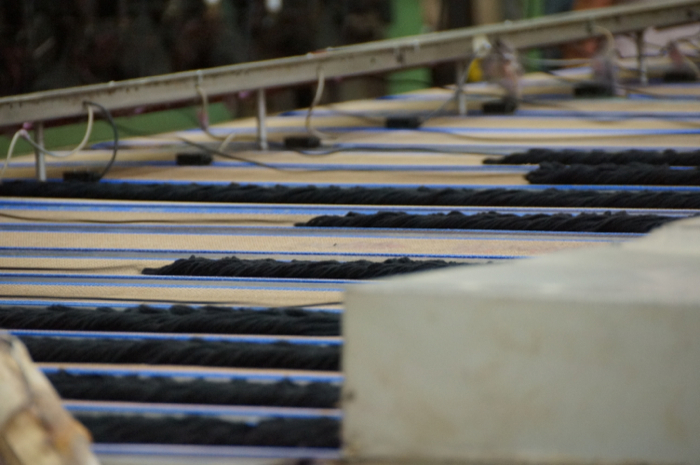 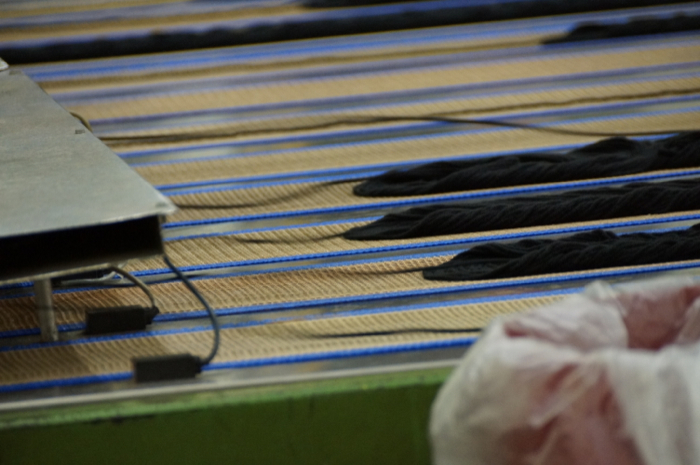 Each conveyor operates independently from each other. You can see the yarn strand behind pulled from the end. The conveyors keep moving in sync with the pulling of the yarn. When the winders stop between the balls, each conveyor keeps moving forward until all conveyor belts for the each winder is at the front of the machine ready to go for the next ball winding cycle.

From here, the yarn is pulled forwards and up over the operator of the 2nd employee where they are part of the labour intensive winding process.

Winding of The Yarn 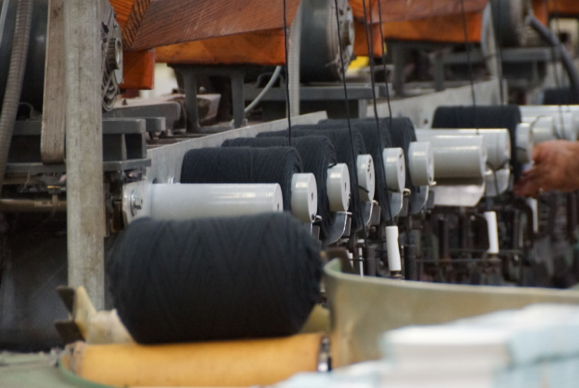 There are 3 Sets of Yarn Winders. 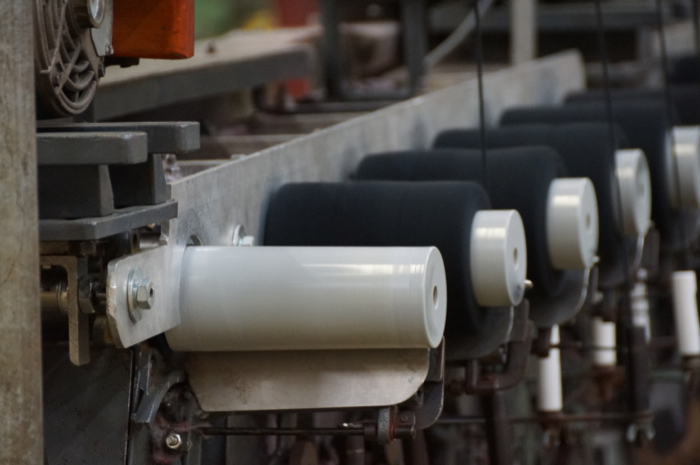 The yarn winders are divided into three sections. If this one one massive winder, the operator would be too long with too many winders empty waiting for the reset.

With the 3 sections, the first winder section has 6 skein spots of the 19 that are being fed to this entire machine. The operator just has to deal with 6 and then reset the machine to start again. The operator then moves to the next section that stops. They move between the 3 sections constantly throughout their shift. It’s a lot of work and you must be on your feet the entire shift.

Notice the diameter of the interior spools. The yarn is being wound really tight. The operator cannot remove the yarn off this spool on their own. A hydraulic is released to push the yarn forward when the cycle is done. The operator pulls the skein off the spool. With a snipper cuts the yarn and feeds the new end to the empty spool. They then sit the skein down on a conveyor readying for the shaping and ball banding.

The yarn expands on its own once taken off the spool. The puffing up of the yarn a minute earlier before winding has memory in the yarn. It’s not on the winder long enough for it to lose it’s fluffy look and feel.

The interior of the ball where the spool was instantly fills in with the yarn on it’s own.

Shaping of the Yarn 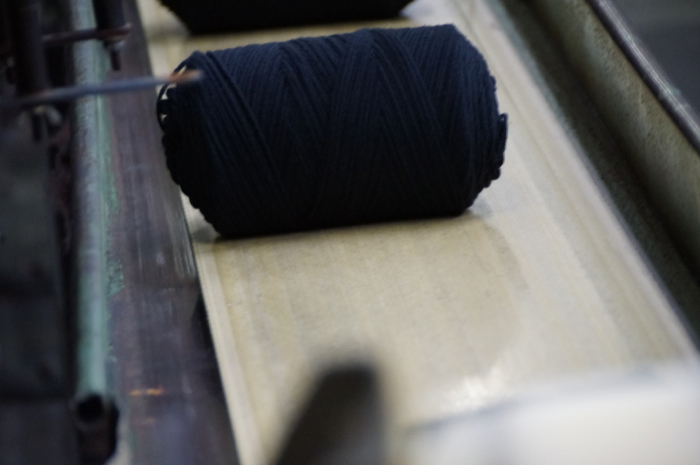 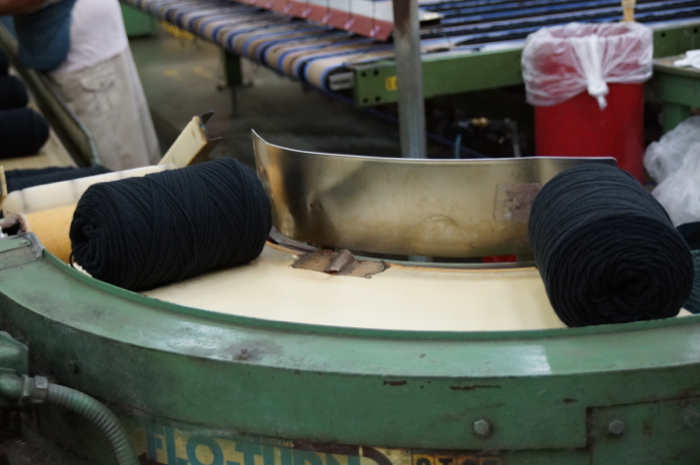 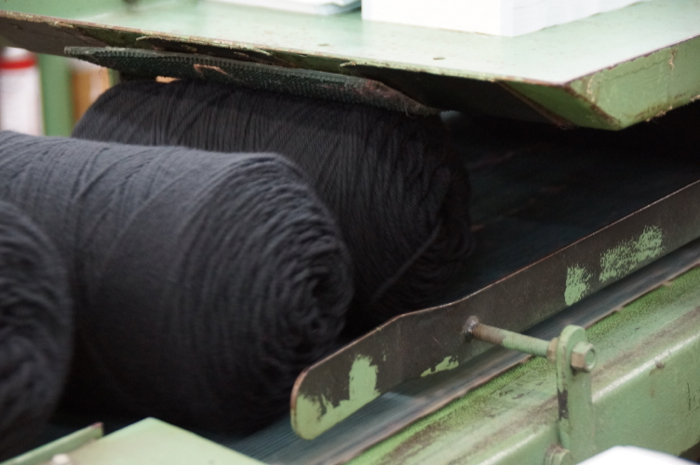 Shape of Caron One Pound Yarn

I couldn’t help but notice that the yarn doesn’t look the same when it comes off the winder. It reminded me of a tin can shape. The yarn on the shelves has a rounded edge look.

When the yarn is taken off the winder, it heads down a mini conveyor and will pass through a compressor. The compressor slightly squishes the ball and causes it to roll at the same time. This creates the rounded off look and squishes the ball down for the ball banding process. 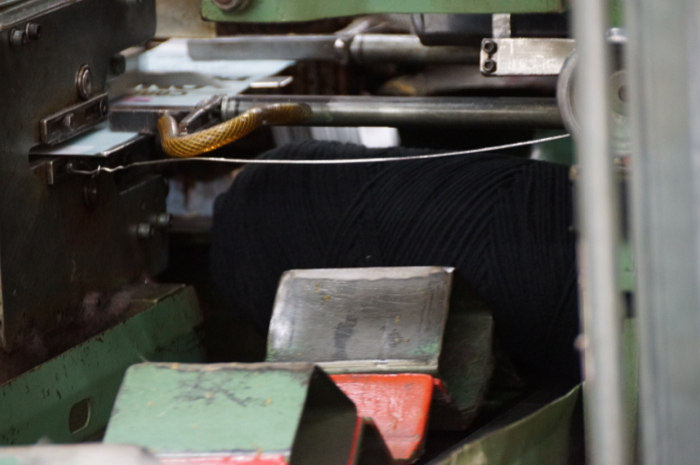 Caron Yarn, Ball Banding. Ball goes through the conveyor and a machine automatically wraps the balls 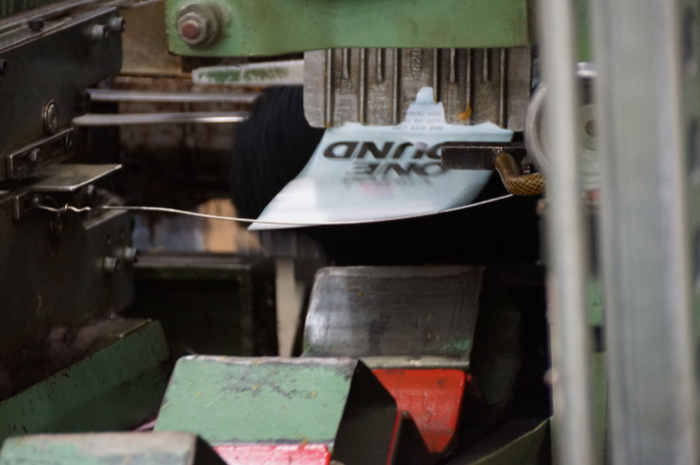 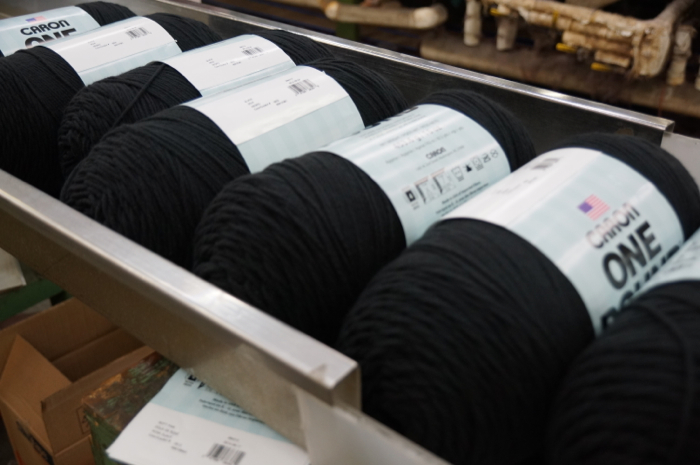 On the Other side of the Ball Bander, the yarn is ready for packaging 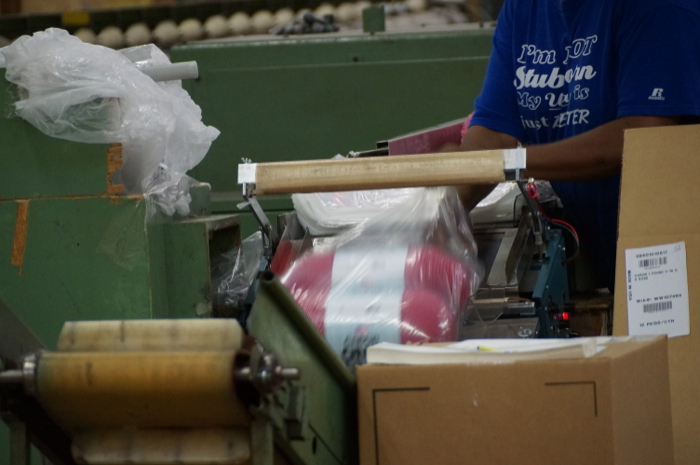 The Worker Helps the Sealing of Yarn into plastic. Some wraps are single balls and others are in doubles. 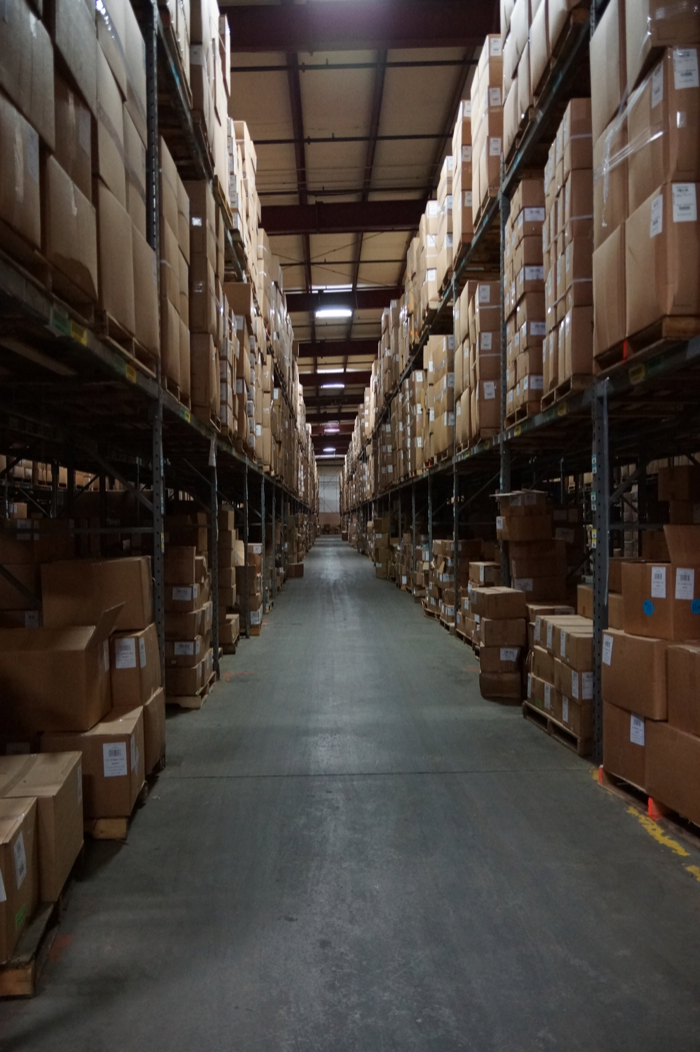 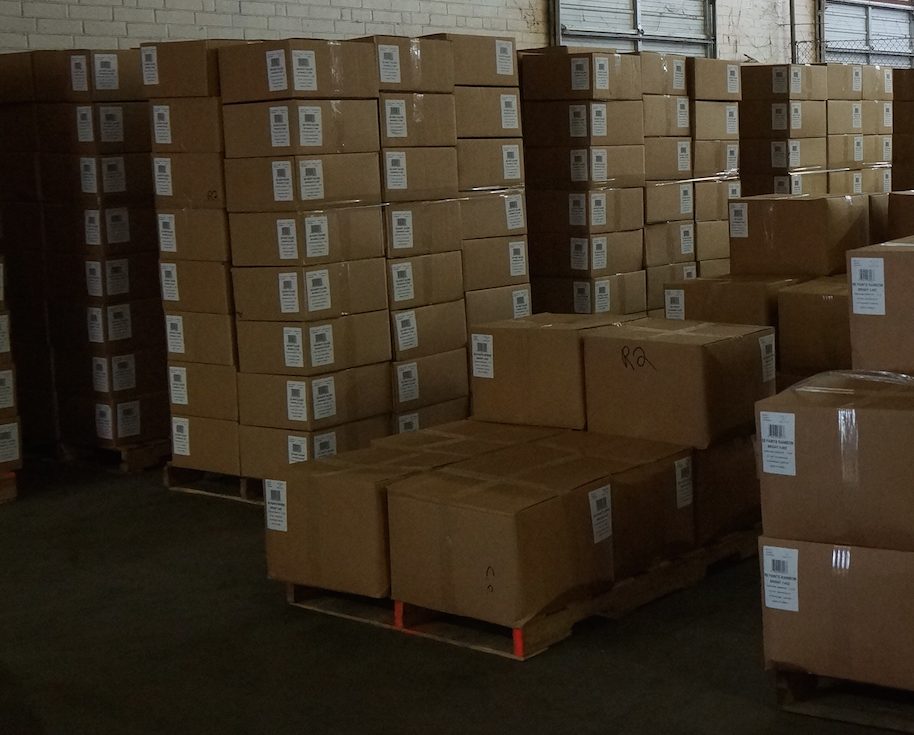 Pictures will never do the warehousing of the yarn any justice. It is massive. Some workers have bicycles to get through the warehouse as it is so massive. The warehousing distribution is like a hive of ants moving around with a sense of purpose.

Watch out for forklifts and electronic pallet jacks with the workers riding along. Orders need to be picked and shipped out to fulfill the store needs. This entire facility feeds every store in USA with a secondary facility in Canada fulfilling other orders to support this facility.

Orders have to be picked accurately, wrapped and ready for the transport trucks to pick up the yarn. Being a former transport driver having seen my share of warehousing in my day, this facility is fascinating in the way product is handled.

The yarn is picked up and either taken to a store directly where you will find it. It could also be taken to the buyer’s distribution facility such as Walmart, Michaels Stores and other places to be shipped on the next truck that is dedicated for the store.

So What Happens to Reject Yarn?

You may notice in certain stores that carry yarn that there is Mill Ends for 1 Pound or something like that. This is yarn where the yarn ball didn’t meet the weight or size requirements to be packaged. The yarn brand is usually not identified inside as it’s classified as seconds.

The yarn could also be an off-shade meaning the standard colour wasn’t achieved during the dying process. It doesn’t allow it to go out as 1st Quality Yarn. Yarn has a long journey and an off-shade isn’t a deal breaker to everyone so it’s sold off as mill ends.

I hope you have enjoyed my tour. What did you think of this tour? I have pictures for automated winders that are completely hands free. Would you like to see that? Let me know by leaving a comment below.

57 thoughts on “How Caron One Pound Yarn is Made”