The Differences in Wool

Have you been to a yarn shoppe and you look at the price of wool and your breath gets taken away with the price? You see an elevated price and think, “Is there gold mixed into it?”

Look, I’m an everyday yarn user. I love sales. The cheaper the better and for me walking into an exclusive luxury yarn shop is like walking into a forbidden place. That’s just the type of crocheter I am. No one should apologize for being this type of yarn user as statistically, over 50% of us use everyday yarns found in main retailers.

Wool keeps you warmer as it’s natural insolation that our ancestors used and plays a strong factor. Here in Canada, my winter hats contain wool.

So I asked an expert recently to tell me the difference between the claims of wool on a product. I had simple questions:

The answers back came in two major answers. It comes down to geography and processing of the wool.

The Processing of Wool is Like A Car Wash

When you go to an automatic car washing station, you usually get a choice. The quick scrub and a rinse to the gold package of extra scrub, under the spray and even polishing. They are always a different price, unless they have a sale, of course.

The Raising of Sheep to Create Wool

Sheep, of course, is a creature that needs things for survival. They need food, shelter and additional care when needed.

While some sheep naturally shed like Bighorns, other domestic sheep-like Merino Sheep, their wool will continuously grow. In extreme cases where they are unable to get cut, they can entomb themselves into death with overheating and restrictive ability to walk. It’s almost a sick joke of mother nature that a creature needs human intervention to live.

In some breeds, a sheep is sheared once a year, in other breeds, twice a year. Sheep coats can be between 2 – 18 pounds depending on the sheep. Let’s take a look at Patons Shetland Chunky Yarn.

Shetland Sheep’s coat only weighs between 2 – 4 lbs. This means you have to raise a lot of Shetland Sheep to make up the difference of other types of sheep that have bigger coats.

Usually, independent retailers cater to more naturally based fibres or higher mixes of natural fibres. Thus, in an independent yarn shop, $30 – $40 for a 100% wool product of this size is reasonable.

The Processing of Wool

What generates the most change in price is the process by which the wool is processed. Under the microscope, wool looks like the stems of roses. Prickly to the touch. Daniel refers to these as barbs, like barb wire.

These serve a purpose but also create the irritation of the skin to wool touch.

If you have ever been to a historical interpretation site like an old village where the staff is dressed up to recreate the illusion of the past, you may notice the people preparing wool to be spun. You will notice they put the wool onto some brushes and brush the wool. They do it so quickly at these places that yes, they are creating yarn, but they not creating quality yarn. I’ll explain.

The sheep breeds play a strong factor in the quality of the yarn. Like us humans, we are not all the same. Sheep are the same way because of the level of barbs that are on their wool fibres. Also, sheep that are sheared twice a year are more valuable as their wool is considered fresher and cleaner than sheep that are releasing their wool just once a year.

When certain breeds of sheep are used which increases the prices, it’s usually labelled on the package of what type of sheep’s wool is in the product. It’s the difference of having just a generic sheep versus a specialty sheep.

If I told you my hat was a wool hat versus telling you it’s a Merino wool hat. For those who understand wool, you automatically know the Merino is more valuable and I most likely paid more for the yarn or finished item I bought.

In big-box retailers, due to trying to be the best pricing possible on most things. There’s a race to the bottom of the dollar figures to get things to be as cheap as possible. Thus, you generally have a choice of types of yarns to buy. For myself, I’ve learned over the years that yarns are not equal to each other.

There isn’t anything wrong with yarn that is as cheap as possible. However, you get what you pay for. There is a market for the cheapest yarns to the most elaborate yarns on the shelf. I’ve come to understand that usually, the retailers will be inline with the true costs of a product.

So you have a 100% Acrylic Ball sitting beside a Fibre Blended Ball. Both are the same size ball and the fibre blend can be up to double the price. It’s because they are not equal products.

I remember when Caron Cakes came out and still see people complaining today when they cross-compare Caron Cakes to Bernat POP!. 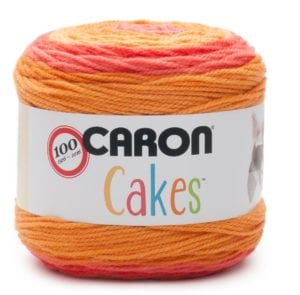 Caron Cakes has 20% wool used in the product. They ran testing of the type of yarn before it ever went out to the public.

After significant testing, it was determined to put in 20% wool and commit to the wool being inside the product.

Wool takes to the dyes differently than acrylic. It can be deeper tones and really give a rich look to the fibre. It also increased the thicknesses of yarn strands. Giving thicker volume.

Why Do Some Wool Felt and Others Don’t?

Generally speaking, all wool will felt in its natural state. The barbs on the fibres are responsible for the wool felting. The more barbs, the more it will felt. You can have different levels of wool such as Merino and more that will felt up if it’s activated by hot water and agitation. It’s why these types of yarn require you to hand wash.

When fibres are mixed with other fibres, it reduces the number of barbs on the fibre as other fibres don’t have that. Items like Caron Cakes will not felt because the mix of wool is too low for that to happen.

The hot water and agitation open up the fibres and the barbs release from each other. The agitation causes the barbs to snag each other and blow up the wool shaping. It causes up to 50% shrinkage.

The manufacturers will reduce the amount of wool in a product to prevent the felting action to happen. However, they can force it not to felt as well.

DK Super Wash is 100% Wool but will not felt. The name of the product tells you why. The wool has been treated to a special wash to remove off most of the barbs that are on the wool. Removing the barbs removes the option for your yarn to felt when washed. In fact, you can even machine wash the DK Super Wash and it will not felt.

What Causes the Itch

Medically speaking, an allergy to wool is very rare. It’s not impossible and some people are legitimately allergic but most people itch due to the quality of the wool.

The less the wool is brushed during processing, the coarser the wool will be. This means, there are more barbs left onto the fibre.

Skin sensitivity to the barbs on the wool that catches onto our skin to create the rash. It’s essentially the wool scratching your skin. Many assume it’s because they are allergic, it’s caused by the irritation of the fibre.

The breed of sheep plays a factor for the number of barbs on the fibre but it’s mostly the processing of the fibres to remove most of the barbs. The more barbs that are moved, the more the fibre was processed and the less likely you will be impacted.

When Caron Cakes came out, some automatically assumed they were allergic as it stated wool. Others who claimed to have wool allergies didn’t react as they don’t really have allergies, the wool was processed more removing more barbs making it less likely to irritate their skin. Of course, we each have our own individual sensitivities.

I learned a lot in asking simple questions and coming to realize that name wool is a general term. The quality of the wool depends on the sheep. The processing plays a strong factor in the final pricing. I’m not allergic to wool myself but I will itch if the wool isn’t processed enough. The only yarn that made me itch at Yarnspirations was Patons Colorwul. It’s since discontinued.

For me, the independent yarn shops are a necessity of life. While the yarn may not make you itch, the pricing could be the cause of it. Knowing there’s a difference in levels of wool puts into perspective costs.

For me, I don’t use the term that wool or independent yarn shops are expensive. They are offering a calibre of product levels that go beyond the typical big-box retailers. They have a place and now I know. It’s just for me to determine if I spend $5 to make a hat or between $20 – $30 to make one. The difference in how wool retains heat and my needs play the ultimate decision for me.

Comments (11) on “What’s The Differences in Wool?”