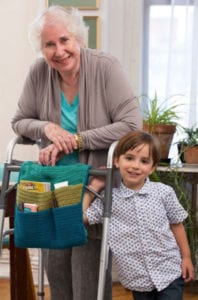 A Crochet Walker Organizer is just the ticket for those who need to rely on a walker to get from space to space. My grandmother wasn’t answering the phone on time but returning calls many years ago. My mother suspected something was wrong and drove nearly 3 hours to check on her.

My grandmother was a stubborn and very independent woman. Upon arrival, she found my grandmother had fallen weeks earlier and didn’t say anything. She had moved her items to the floor and was crawling around her apartment.

Reluctantly, my grandmother agreed to move closer to my mom in the same town. My mother packed up her things over a week and moved her to her own apartment in a building. Still giving her the freedom. First medical stop was to check on her health and get her fixed up. The second stop was to the medical supply place to pick her up a rollable walker. She was totally against it but within a week, she was motoring around with confidence. Her walking to the mailroom to check her mail was her daily exercise.

My grandmother had her independence right until the very end. My last visit with her, she didn’t know who most of the family was. She smiled on time as she could see us smiling but glossed over in not really understanding. From a very smart person to the painful reality of what old age can do to memories and basic life functions. I have said in the last few years, ageing is the cruelty of humanity. It was her wish to stay in her own place until the end. My mother would check on her. Meals on Wheels and homeworker would see to her needs. The last visit she was on the ground, with her walker as she was walking, she received her wish. To stay home until the very end.

I reconnected with a friend of my past. I’ve been almost 20 years. She’s now using a walker and it was shocking. She was attacked several years ago in a parking lot leaving her with brain damage. Attacked for the paper (money) in her purse banging her head on the pavement and the jerk left her there. The inability to stand for balance. However, our conversation was like it had been before.

She is most angry about not being able to wear her high heels. Her heels were her identity. The mugger not only took her money but a part of her identity… that really upsets me the most.

You just never know… but walkers give people the ability to keep moving when life gets in the way to keep us from having the freedom to do so on our own.

Not at this time.