How Caron Simply Soft Yarn is Made

How Caron Simply Soft Yarn is Made 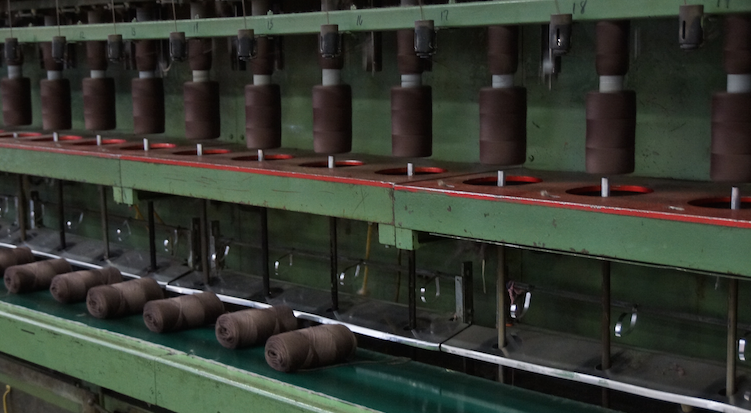 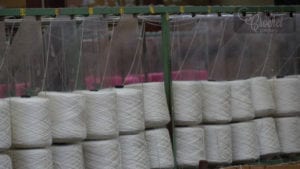 Industrial Yarn Cones Staged to Be Rolled into Skeins

With permissions extended by Spinrite LP, makers of Caron Yarns, I’ve been granted to show you how the Automatic Yarn Ball Winding Machines look and work at the Caron Factory in Little Washington, North Carolina.

I wrote an article about how the Caron One Pound Yarn Balls are made showing you the process from a manufacturing cone to the yarn ball package you see on the store shelf. The biggest difference between the Caron One Pound verses the Caron Simply Soft is the winding process. 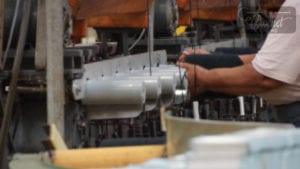 How It All Starts

The Caron Plant starts at the finishing and packaging process of the yarn. The yarn is made at another location in the USA where it is taken from the raw materials, dyed, spun into yarn and rolled onto industrial cones as you see in this picture. The cones are then shipped to Caron for the next step in the process.

There is a difference between the yarn you see here verses the package you will see on the shelf. It’s not ready for consumers as this stage. 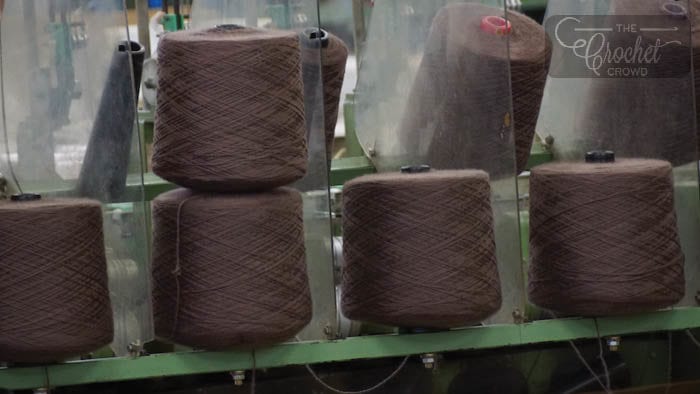 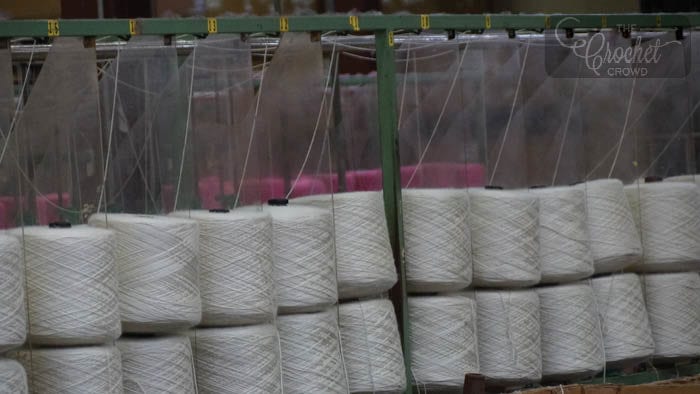 Industrial Yarn Cones Staged to Be Rolled into Skeins

Once the front cone runs out, the operator removes the cone and throws into a huge container to be shipped back to the yarn manufacturer to recycle it through the process. The operator then moves the next cone behind to the front spot and reloads another cone.

Each one of the cones are tied to each other so the machine feed will not run out causing the entire operation to stop. These tied sections appear in yarn balls once in a while and it’s usually from the industrial cone jumping from one cone to another during the wrapping process.

The yarn on the cone appears thin and you may not recognize it as being regular yarn. The yarn needs one more process to get it to the quality we know on the store shelves. It needs to be steam blasted.

From the holding frame, the yarn travels up and over the aisle so the operator can work without having to dodge sonic speed yarn moving through the process.

It takes only 11 minutes from one industrial cone to be wound into the machine. Each industrial cone holds about 10 consumer balls to put into perspective on how fast this process is. The operator is constantly replacing the industrial cones and with so many down the frame to replace, it’s a fast paced job to ensure the machine doesn’t run out. It’s like a relay race. 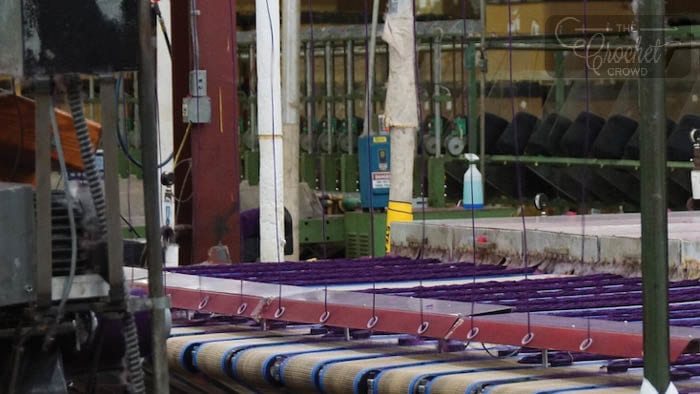 Each one of the yarn winding rollers has it’s own conveyor system. In the event that a yarn strand breaks, it will stop one conveyor instead of the entire machine. In the event the yarn strand is broken, they don’t stop the process but the winder roll for that conveyor will not wind any more yarn. They will re-feed the winder after a break instead of stopping the entire process. You can see one of the conveyors is empty in the above photo but the process still continues.

The yarn is laid down in a circular formation. 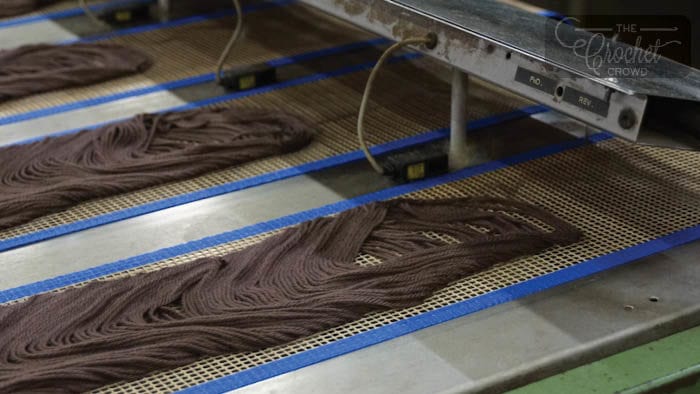 Yarn is streaming down in a circular format for steaming.

The circular formation ensures that the yarn will be fully exposed to the steam blast. It also prevents tangles in the machine as it will travel down the non-stop conveyor like this. It will pass through two steamers to re-energize the fibers. 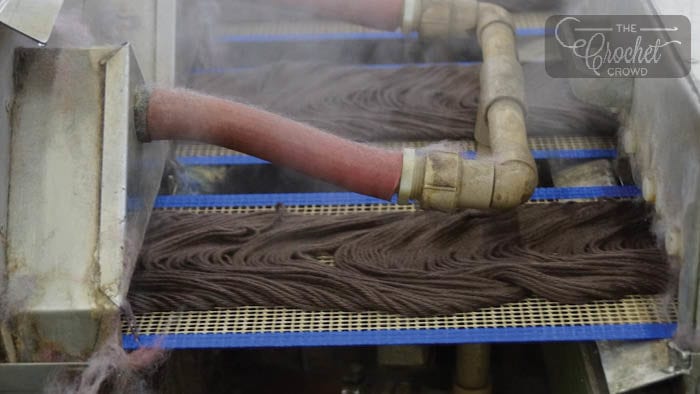 Yarn After Steaming to Dryer

Once it’s through the steamer, there is a bit of distance between the rollers and the steamers. This gives the partially moist yarn, through steaming, a chance to dry up. 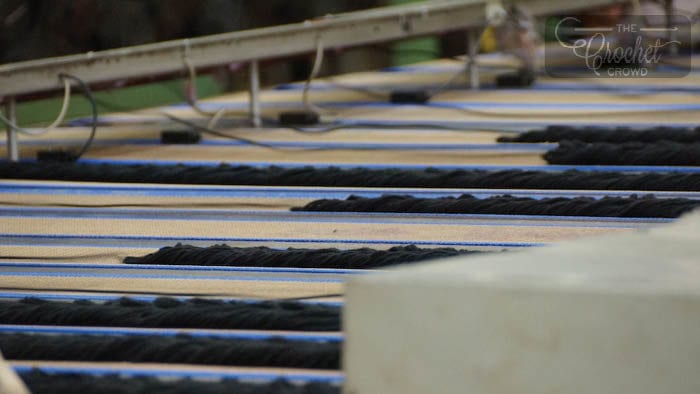 Yarn on Conveyors after Drying and Heading to Rollers

The yarn is now ready to wind. The conveyor continuous to move throughout the process and the winders are timed in sync with the conveyor. When the winders stop between the balls, the conveyors continue to move forward to the edge where it automatically stops and waits for the winders to begin again.

To prevent the workers from getting tangled in yarn again for the winding process. The yarn goes straight up from the conveyor up and over the aisle to the automatic ball winders.

It then is fed into the winding machine. The winding rolls are much bigger than you may expect. they are wound tight to ensure quality control. Once the winding roll is removed from the centre, it puffs out to give you the consumer look to the ball. 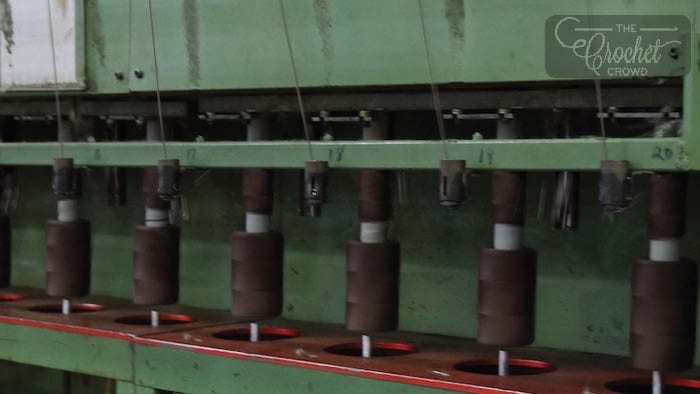 Yarn is Rolled Into Balls Tightly on Rollers

The winding process is automatic with no intervention from the operator. One ball is wound per roller at the exact same time. Once the number of rotations is made which makes up the size of the ball required, the entire machine stops. The yarn is cut by the machine and the machine resets itself.

The bottom ball is automatically pushed off the roller. 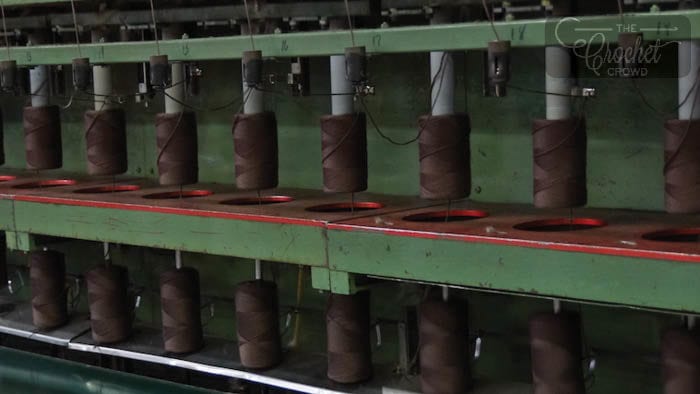 Yarn is Pushed Down off of Rollers

A new yarn ball is being made as the bottom part of the machine handles the transfer of the finished yarn balls that were pushed off the rollers.

The bottom tilts the resting spot and all of the balls fall in sync onto the moving conveyor to take it to packaging. 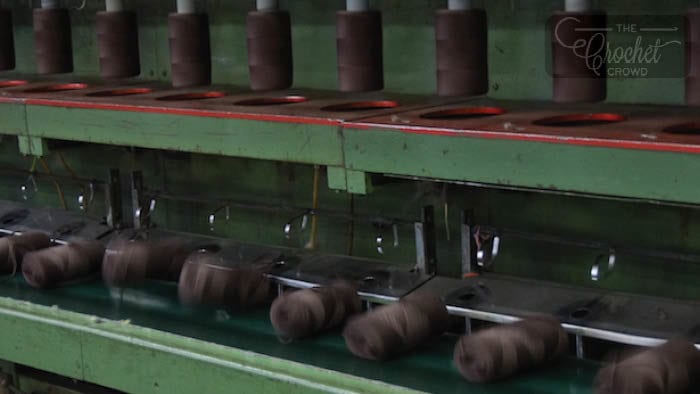 All the balls will have made it’s way down the conveyor to automatic packaging by the time the next batch will fall on top of the conveyor. This prevents a jam up of yarn balls during the packaging process. 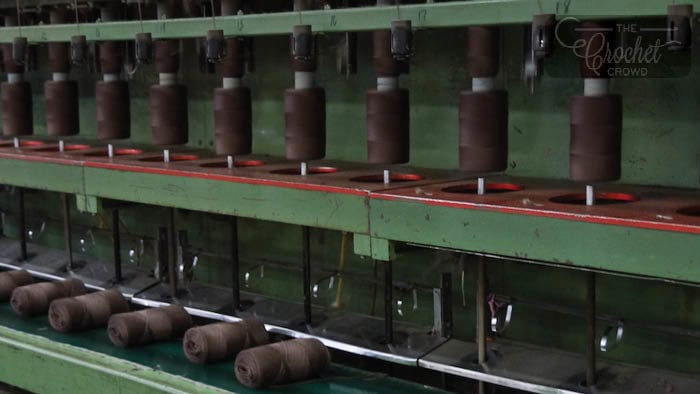 Yarn is Moving Down Belt

Each one of the balls resembles a tin can shape at this time. It needs one more process to give it a yarn ball appearance.

The balls go through a roller system where the ball is physically rolled through a smaller space than the size of the ball. This causes the tin can shape to disappear and the center gets pushed outward on the ball. 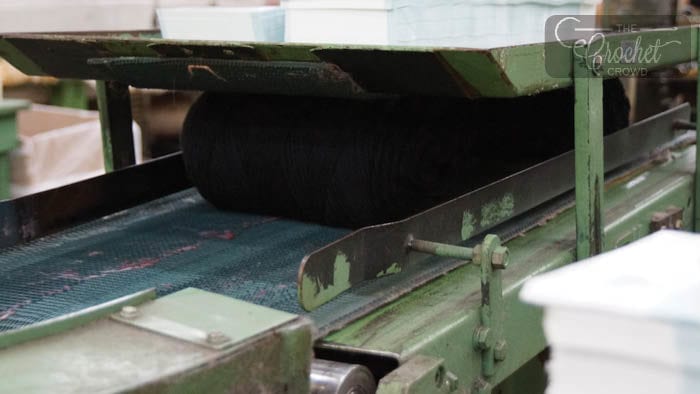 The balls move from the conveyor to the automatic ball bander. A worker is waiting for the yarn to be balled up. The machine automatically bags the yarn into groups of 3 where the worker then sets the ready to go yarn in a box.

Once the 8 foot tall skid is stacked at the machine, another worker moves the skid to the warehouse where it will then be divided up between the stores and distribution centers that order the yarn. 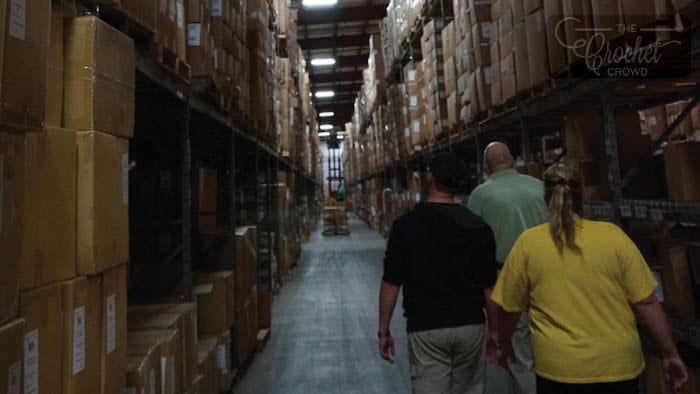 The next step is for the stores to receive the yarn and put it on the shelves where you have the opportunity to purchase.

I hope that you enjoyed my tour today.

9 thoughts on “How Caron Simply Soft Yarn is Made”