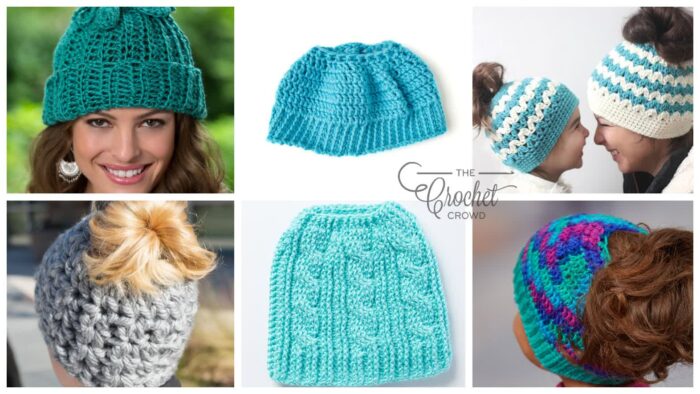 I really enjoy making hats, one of my favourite things to make next to shawls I think. Now that I actually have long hair a messy bun hat is what I finally settled on. This collection of messy bun hats is great if you have messy hair and don’t care, pop on a hat poke out that bun and away you warmly go. You can never have too many hats!

I also noticed how easy it really is to turn pretty much any hat into a messy bun hat, which for someone as indecisive as I am it was a very bad idea to open that can of worms, I’d never decide, back to the list I went. I have made one of these hats for a friend, she has an insane amount of hair and loves the hat. 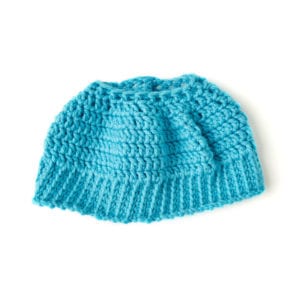 This is a super easy hat and a great pattern to whip up in an evening with some of that leftover yarn we all have kicken around.

This Chic And Quick Messy Bun Hat Pattern is a great one to work up for craft shows, messy bun hats are quite popular here at the winter shows, it is one of my bigger sellers. I think I want to try adding this to my pattern list for next season.

This Crochet Chic And Quick Messy Bun Hat Pattern was Designed by Laura Bain using Red Heart Soft Essentials. If you are in a location that has the Heat Wave yarn accessible to you, this would be a perfect hat pattern to try that yarn with. 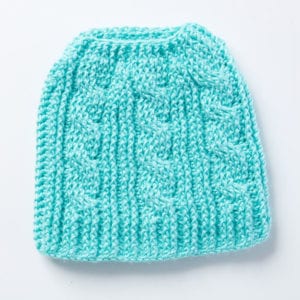 This Crochet Twisted Stitch Messy Hat Pattern is such a pretty hat, with its twisted look it would be fun to try in an Ombre yarn there’s so many to choose from now, I really can’t wait to play with all the new yarns I have been seeing come out lately. My creative level has been on bust the last couple weeks I want to create faster than my hands are able to move if I could grow a couple more hands that would be super!

This Crochet Twisted Stitch Messy Bun Hat Pattern made using Caron Simply Soft, but feel free to try some of that new yarn that has been coming out, if you do let me know how you like it, and which ones you like the most help me make up my mind where to start.

There are two pages for this. If you click on the diagrams, both are on the same download PDF. 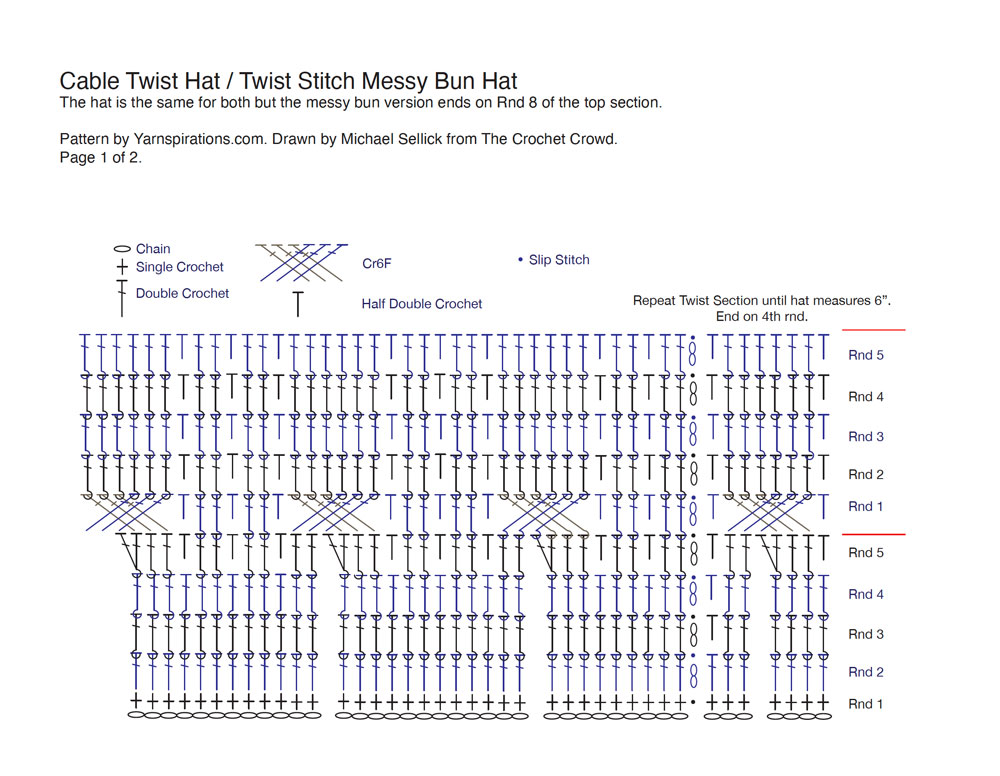 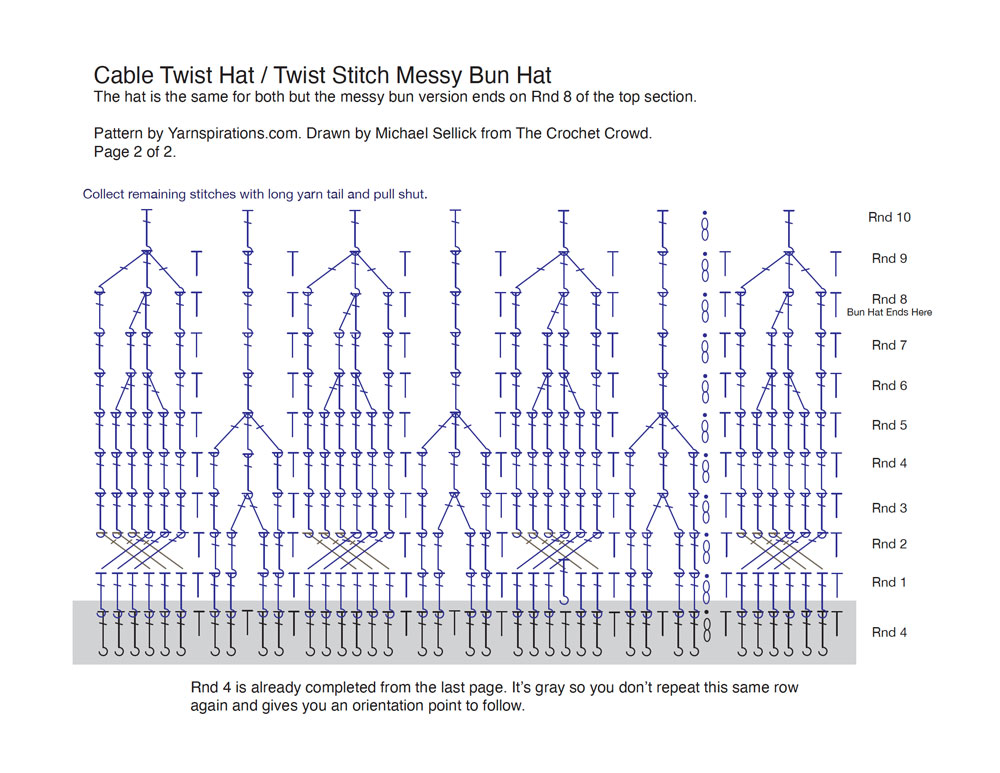 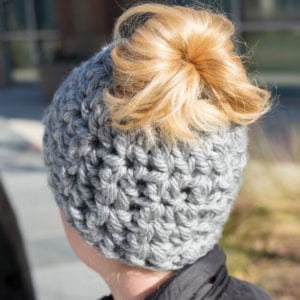 This pattern is made with a bulky weight yarn so it will work up really fast. Make this Crochet On-Trend Messy Bun Hat Pattern in a few different colours to go with any mood. This pattern would be a great one to work up for all your long-haired friends, they will appreciate it big time.

This beginner-friendly Crochet On-Trend Messy Bun Hat Pattern was designed by Katy Petersen and adapted by Red Heart Design Team made using Red Heart Grande, or you can use any bulky 7 weight yarn. If you can’t find a & weight in your area, or a colour you like, you can easily combine smaller weight to get what you need for this pattern, play with colours and have fun with it. 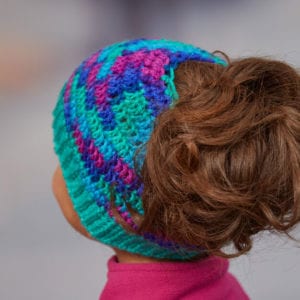 This is a great hat pattern for long hair of all ages, this Crochet Messy Bun Hat Pattern can be worked up in all kinds of fun colours to match all your outfits and your moods. This pattern is another great one for using up yarn ends, give as gifts or make up for craft shows.

This Crochet Messy Bun Hat Pattern was Designed by Laura Bain made using Red Heart With Love, I love the bright colours in this line, I may have to grab a few balls and make one for my girls and me. I have some fun butterfly buttons I’ve been itching to put on a few more hats.

Crochet Two For One Hat Pattern 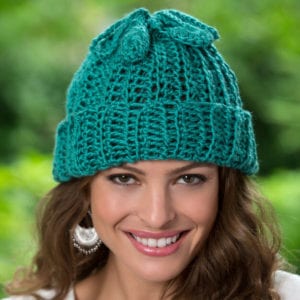 Two For One Hat And Cowl

Things that have multiple purposes are the best, a hat that becomes a cowl how fun is that, or tie it loosely in hat form it becomes a messy bun hat so many uses for one little hat so little time! You start your day out and it’s cold so you want your head covered, you put on this super awesome hat, the day starts to get warm, you don’t need the hat as much right now but a cowl would be super useful boom! It becomes a cowl!

Two For one Hat Pattern 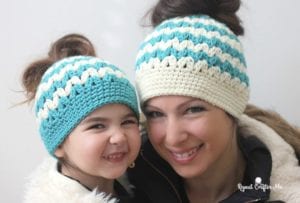 This hat is the pattern that I had made for a friend of mine, I used different colours, but I really love how the hat looked worked up, and she absolutely

loved it when I gave it to her for her birthday. This Crochet Mommy And Me Messy Bun Hats Pattern is a great hat pattern for anyone with long hair and you want something a little more different than the Chic And Quick Hat or the simple Messy bun hat. There is no such thing at too many hats for anyone.

This Crochet Mommy And Me Messy Bun Hat Pattern was designed by Sarah the crafter, crocheter and crock potter made using Bernat Super Value There are lots of colours to play with.