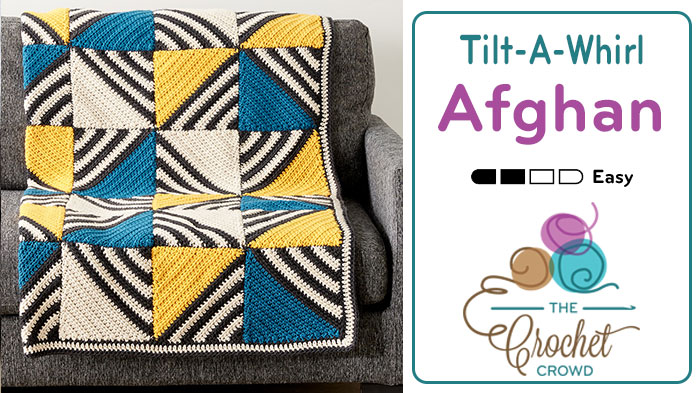 This afghan may have your mind spinning in circles as if you are riding the Tilt a Whirl… Introducing the Crochet Tilt A Whirl Afghan by Yarnspirations.

This afghan consists of squares using a corner to corner technique with half double crochets. It’s an illusion for the spinning action. Picture each square on its own with half of the square having the stripes and the other half being a solid colour. How they are put together creates the illusions of swirling in circles.

The tutorial below covers an overview of the pattern but also how to do the steps. Mikey makes 2 squares and shows the steps and tips for joining the squares. He then does a miniature sample of the border to show you how it’s done.

The best thing about the project is that the yarn colours are carried up in the stripes area. This means no cut strings each time a strip appears. So it makes it quicker and simpler. When joining them together, you cover over the carryover string in the join and you will never see it. It’s pretty awesome.

Crochet and Knit Winter in July Many free patterns go under the radar on Yarnspirations because they make...

Stitch Ambassador If you’re looking for something to work on for craft shows, gift ideas or simply...

Crochet Corner To Corner Snowflake Blanket Colder weather is fast approaching so it’s time to get...

Crochet Circles in Squares Throw I love big ole circles such as this. It leaves my mind spinning with...

Baby Blankets for Summer Cute little baby blankets for crocheters to hook up. Rock-a-bye baby, on the...

How To Make a Graph for a Crochet Picture Afghan

How To Make A Picture Graph Afghan Making a picture afghan isn’t that difficult as long as you get...

Crochet Picnic Patterns with Lion Brand With Summer coming up fast, Picnics are a great way to enjoy the...