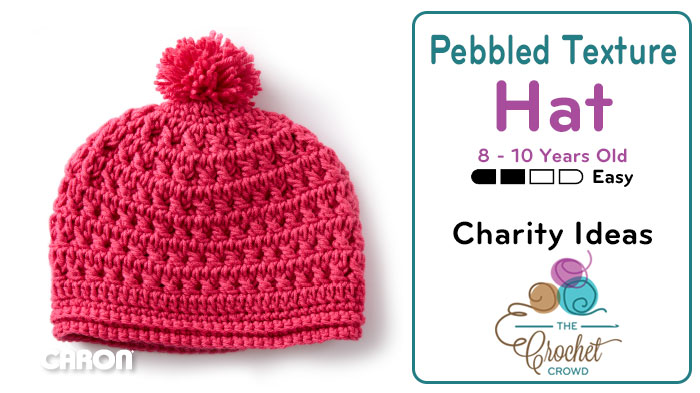 Try this Pebbled Texture Hat for 8 – 10 years of age. One thing that is clear with the younger generation and many of us experienced this others is peer pressure to not wear a hat or gloves during the winter. Kids don’t mind wearing something when it has style or something unusual to it to make it unique.

The Pebbled Texture Hat, seen to the right, shown in Adult Size in the picture is smaller for the 8 – 10 year old size. The pom pom provides a finished look but I would consider the pom pom to be an add on for this age category. You know how kids can be. Give ’em a choice.

A major plus with this hat is the texture that is seen gives the hat nearly a double layer on the interior. Makes for it to be thicker so it will be warmer. The stitchwork is more elastic-like as well. So it will shape well to the head too!

For those who need help with this pattern, the video is provided in 8 – 10 years of age size. You can either follow the pattern or just the tutorial. If you are struggling with the instructions, just refer to the video as I show all of the steps to make this hat. It’s pretty easy generally. To make a pom pom, I have also provided that tutorial below too.

Yarnspirations has released their latest Lookbook called Caron, Stitched with Love. The book of free patterns for both knitters and crocheters have one central theme, charity. It focuses on simple projects and some that require a bit of knowledge of crochet. Personally, I love how the Lookbook allows new crocheters to learn new skills but also for the ones who have some skills to go a step further. Not only is this book charity oriented, but it also a great starting point for crocheters and knitters to do something more than practice with stitches. It will allow them to learn, grow and contribute to their own community with the projects they create.

The project above is from this Lookbook. In this article is one specific pattern and I have a tutorial that matches it for those who need an extra helping hand with the instructions and skills needed to complete the project.