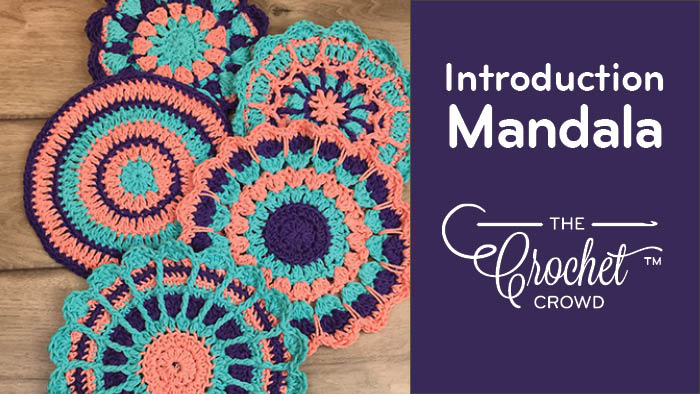 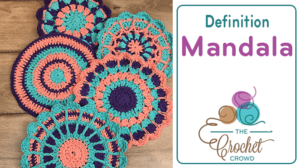 Crochet Mandalas are very hot in trend at this time. We’ve seen major projects by designers really capture us crocheters with awe inspiring designs. They are incredible visually as well as provide skill building techniques that leave crocheters feeling really proud when they are finished. 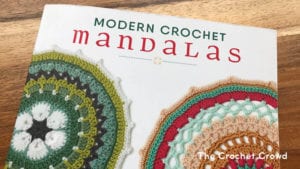 This Crochet Modern Mandalas Book has 50 designs from assorted designers gathered by the editors of Interweave.

The book has written instructions for the mandalas plus crochet diagrams to follow. Just as a word of caution, I have noticed mistakes in the written pattern verses what the crochet diagram is showing. So just watch for that, it’s still a terrific book and worthy of purchase.

In the tutorial, I show a couple examples I tried from the book. I used a 4.5 mm / G Crochet Hook using Caron Simply Soft. Worked out lovely.

You can read more about the book, scan through some example pages and buy direction from Amazon. Click here to see more.

Mandalas, pronounced as Mon-Dah-Lah, simply means “circle”. They have significance in the meaning of life in relationship to the cosmos. They can represent many things in life such as the sun, moon, earth, planets and even more items that that we humans have grown to be significant such as wind, fire and much more.

They can be significant in many religious cultures but was first created by the Hindus as a spiritual guide. The circle is about the idea of infinity and the never ending nature of how big a circle can get. It’s about the circle you surround yourself with which may be family, friends, and communities that you are part of.

One of my interesting finds is that Mandalas were not just for Buddhist, but studies show that individuals in many other religious also have used this artform for their own religious beliefs. This included Judaism, Christianity, Paganism and many other forms of religion that exist. Look to cathedral windows, paintings and symbols used in religion and you may realize that mandalas are in many places in history.

This makes a lot of sense to me as when you look up at the sun, you see a perfect circle. Moon, on full moon nights is a full circle. Beams of light from light sources appear as circles to our eyes. Ripples in a pond circle outward. In an empty room, my cat will sit inside a circle on the floor. I think we naturally, human instinct wise, gravitate towards circles. It could be part of our genetic make up as a species.

For those who make Mandalas but have no faith oriented nature to their creations, they see these as amazing geometric designs. They usually have balance and uniformity. If you were to hold up a mirror at the half way point of a circle and look at the reflection, you most likely would observe what the other half would look like. Pull away the mirror and you will most likely confirm your assumptions.

The contrasting of colours and detail of a mandalas leave many of us astounded.

For me, I was part of the automotive engineering industry in my early 20’s. For car design, left = right. My mentality today always wants to have a mirror effect in my projects. I always want to have the same colour line up instead of being random. For me, mandala designing suits what I have learned and gravitate towards. 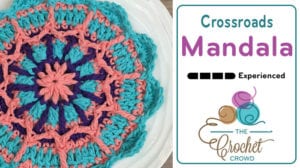 Crochet Crossroads Mandala. Coming up later in this workshop.

Attempting a mandala in crochet can be quite a challenge. It’s easy to draw a mandala to some degree. Mandalas usually have points where colours will sink under cross over lines and have a very three dimensional appearance. With a crochet hook, we have to think ahead to what we want and go and do the steps in order to get the results we are hoping to achieve.

We also have to be thinking about math and multiples. If you add too much, your mandalas will not sit flat and begin to pucker or have a ruffle look. For me in the design process, it’s about taking my time to allow the circle to grow naturally without forcing too many stitches to distort the circle. Choosing a single crochet, half double crochet, double crochet or treble crochet can make the world of difference. Combine that with shells, puffs or popcorns, you might just end up going in the wrong direction.

We also have to think about dominant colours that we want to appear. Pick the wrong colour, the look can be completely different and may be disappointing in the end.

The mandalas are achieved through overlaying stitches on top of other stitchwork to achieve the look. This overlaying effect instantly gives the crochet mandalas a three dimensional appearance in both visual look and physically on the project. For those that have completed Mandala Madness or even Sophies Universe Afghan, you know this to be true.

Here are The Crochet Crowd, we are strictly a crochet community with community members that span the globe in all religious denominations. If you see Mandalas as part of your religious practices or just see them as artistic art, we leave that to you see them the way you wish. We are not here to pass judgement or to tell you the way you need to be looking at them.

We ask the respect of The Crochet Crowd Members to allow others to have their religious freedom without the need to force others to adopt their views. We are all grown ups here and have our own points of view. Let’s be respectful as not everyone think the same way.

8 thoughts on “What Are Mandalas?”